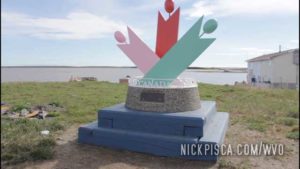 Monument at the Arctic Ocean shore in Tuktoyaktuk NWT

We have been conducting WVO Roadtrips for over 16 years and have several interesting statistics.  In the process of proving the longevity and efficacy of alternative waste oil fuel systems, we have driven a lot of miles.  We even were in the running for the Guinness World Record for longest roadtrip driven on alternative fuels, but got beat out by a couple from Canada.  We would have the world record if they added up all of our accumulative miles driven since 2005, but they don’t allow breaks of longer than two weeks between roadtrips.  Since most of our adventures occur in the Summer, there is too much time in between to qualify for the record.

Here are some of the many records and stats we have collected over the years: 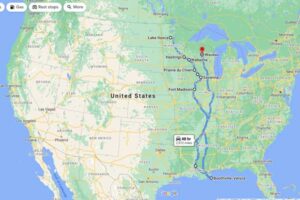 Due to COVID restrictions, we were unable to conduct a 2020 roadtrip.  And since the border to Canada is still shut down in 2021, we are looking for some place new in the USA.  We’re considering taking a drive down the Ol’ Mississipp.  If you live along the river and want to meet up, don’t hesitate to contact us.

We are planning more trips in the future, but running out of ideas and places in North America.  For 2023, we are still working out where we’ll go.  If you have any ideas, send us some suggestions.

There are plenty of possibilities for future WVO roadtrips, and feel free to contact us if you want to help.  We have been working on shipping one of our vans to Australia to circumambulate the continent all on biofuel.  Another possibility is to ship the Veggie Van or Frankenvan to Vladivostok, then drive the Trans Siberian Highway all the way to Europe.  Then ship the van back to North America through Lisbon, Bilbao, or Saint-Nazaire.  If you live along these paths and want to contribute, email us.  A third option would be to find a willing European that has a diesel vehicle and wants a biofuel system, then we fly to their town, install a kit, and use the vehicle to travel Europe and Asia.  Then the original owner gets to keep the kit.

It’s been a fun project and hobby, and we hope to continue for many more years to come.