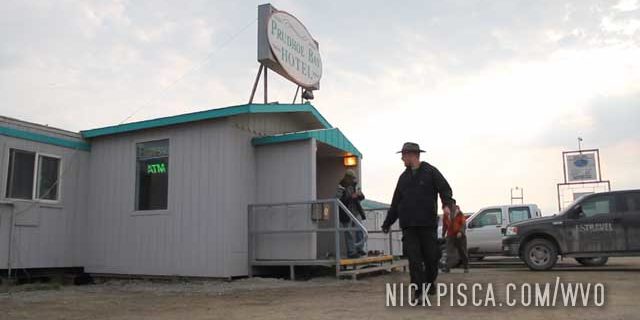 It’s about a 200-mile drive from the Atigun Pass to Prudhoe Bay.  It’s all gradual downhill and eventually you get to about sea level.  The Dalton highway does not go all the way to the Arctic Ocean (unlike the Canadian Tuktoyaktuk Dempster Hwy) but stops short in the tiny hamlet of Deadhorse.  Prudhoe Bay and Deadhorse are companion settlements, with Deadhorse being the primary civilian complex, and Prudhoe pertaining to the private oil company development.  We drove up as far as we could, and got stopped in Deadhorse. 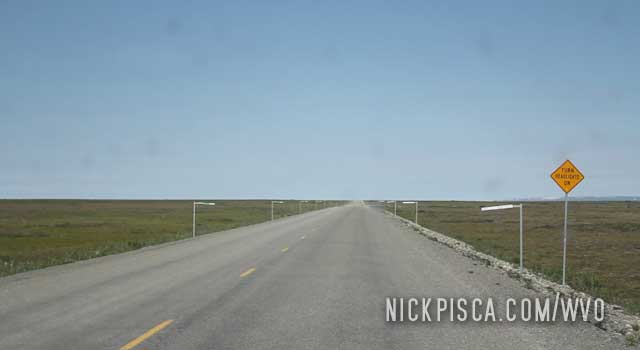 One thing we noticed on drive up near Deadhorse, was that our brakes stopped working.  Just great.  All those bumps and washboards must have blown out the vacuum pump on the van.  We still had some non-power-assisted brakes but it was rather dicey.  We limped it to the settlement at about 20 mph.

As we pulled into town, there was a small sign and mail box.  They said to take a free map of town.  Inside the box was a few dozen 8 1/2 x 11 pieces of photocopied paper, with a hand drawn map of the town.  As crude as it was, this was crucial, because the town doesn’t have any signage, road signs, street signs, anything….  And since most the buildings are literal trailers brought up from Fairbanks, every building looks the same.  So the map is important.

Since we didn’t have brakes, our first stop was the Prudhoe Bay Hotel.  We honestly didn’t know what to expect.  Perhaps they had no vacancy?  Perhaps they only catered to the oil company workers? 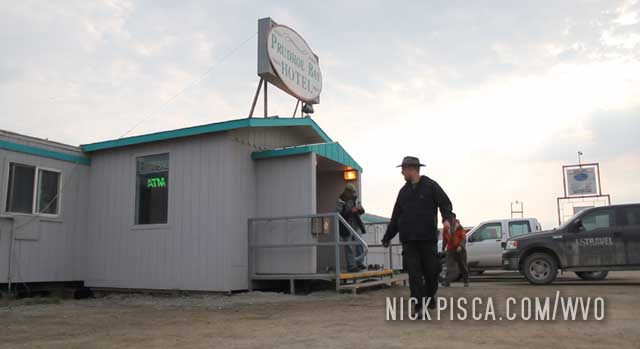 The first thing we did was go to their lobby, find their wifi, and overnighted a new vacuum pump.  Then we went asked if they had any vacancy, since we’d need to spend the night waiting for our pump.  They had vacancy, and thankfully, they were able to score us a room with two beds.  This place is kind of like a barracks so lots of the oil company workers stay here.  It was kind of expensive (about $205 per person), but once we realized what came with that price, it was well worth it.

Since Prudhoe Bay is basically a company town, there isn’t much for services.  There are no restaurants.  So this hotel includes an impressive buffet for breakfast, lunch, and dinner, and also they have a small after-hours hot meal program as well.  They had a real chef that cooked some amazing food.  That was worth half the cost of the room alone. 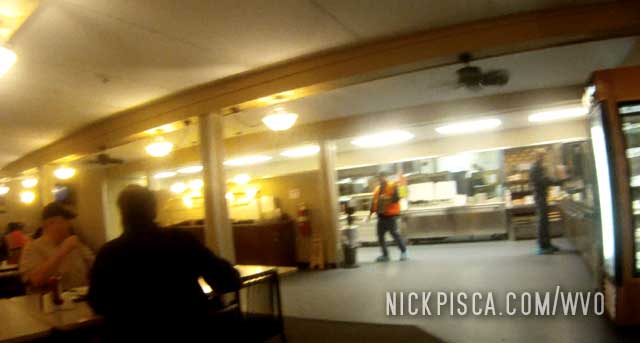 Also, the Prudhoe Bay Hotel has a gym, rec room, and entertainment room.  While we were there, two other retirement couples got stranded in the town due to vehicle mechanical issues as well.  But the majority of the clients were guys coming and going to the oil fields.

The next day, that vacuum pump didn’t show up.  In fact, when we booked the room, the staff laughed at us when we told them we had “overnighted” something up to Prudhoe Bay.  We should have known.

Then we decided to see if the local “NAPA” or mechanics could help us out.  On the paper map, there was supposedly a NAPA on the outside of town.  We drove to the place, but didn’t see any NAPA sign.  We entered, and it was a NAPA, and it had one of everything. It was impressively stocked.  They even had a vacuum pump for the 1980’s IDI Truck.  However, not so much for the IDI Van. 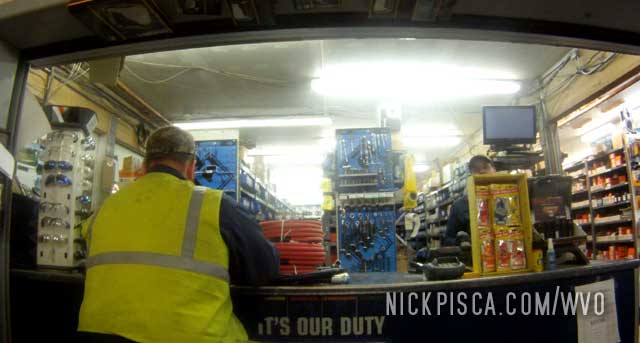 The guy at NAPA said that it’s too bad we have a gasoline vehicle, because all the shops in town focus on diesels.  We replied that we did have a van, and he got us in touch with the Ford mechanic in town.

We drove over and met up with the main Ford guy.  He was from Menominee Wisconsin! Small world.  He said they used to work on these IDI’s all the time, but ever since the proliferation of the powerstroke, they don’t see much of them anymore.  But his shop was open 24-hours (company rules to support the neverending oil company projects) and he took it upon himself and a few colleagues to see if they could rig up a vac pump for me.  They tried to fit a powerstroke pump in the spot for the van, but the frame rail got in the way.  I got to give them credit, they tried for an hour to get it to work, but it just wasn’t possible.  Even as I tried to pay, they declined. Nice guys.

He then suggested we “Goldstreak” the part up from Fairbanks.  We asked what that was.  Turns out that in these remote parts of the great North, there is a service where if there is availability on the plane, Alaska Airlines will fly up auto parts from Fairbanks or Anchorage.  The NAPA person in the south literally drives the part to the airport, puts it on the plane, and then it comes up with the passengers.  Crazy huh?  It’s not a sure bet.  Depending on the size, weight, and trouble with the part, it doesn’t always get shipped up north.  In fact, Priority goes to Postal Mail, then passengers, and then if and only if there is space left on the plane, then auto parts are good to go.

After hearing all this preamble, we were concerned how much was this going to cost.  The cost of the flight up here must be crazy expensive.  The mechanic said it cost an extra fifty bucks.  HOLY COW!  Just that?!  I jokingly told him to send three.

Now all we had to do was wait.  We booked another night in the hotel and decided this was the time to see the Arctic Ocean for the first time.  Since the road doesn’t go all the ocean, civilians must book a trip with the oil companies to get a tour.  So we took care of that and went to the ocean (to be documented in another article).

Afterwards, we stopped off at the Prudhoe Bay post office and general store.  Very very small, but has a little of everything. 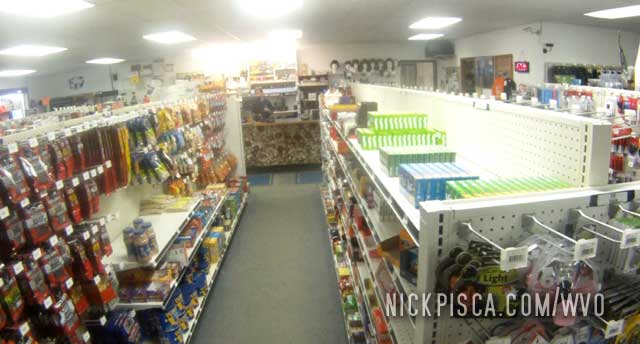 We bought some snacks for the road trip back down to Fairbanks.

Then we went out adventuring.  The sun never set so it was hard to tell what was night and day time.  After two full days of dinking around, we finally got the part.  We made friends with lots of the people at the Prudhoe Bay hotel, hanging out in their cafeteria and recreation rooms. 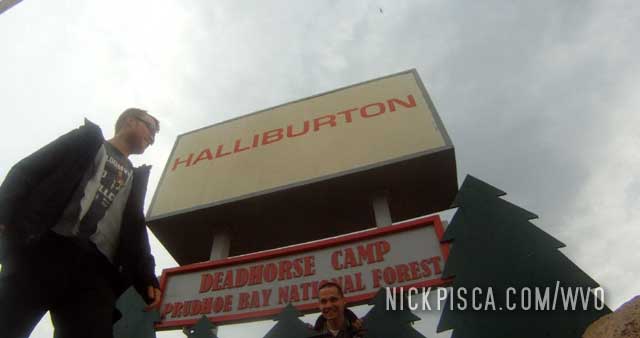 In the rain, we replaced the vacuum pump and tested out the van.  Thankfully, the brakes now worked.  We looked at the open road, and decided to come back in to the Prudhoe Bay hotel for one last buffet dinner.  Our new friends were confused at first to see us again, but once we told them we wanted one last meal with them, it as a good time.

It’s all uphill from here. 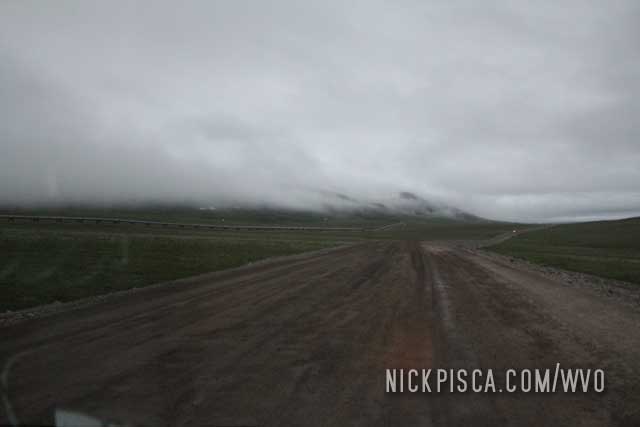 The Dalton Hwy doesn't go all the way to the Arctic Ocean. Instead, it stops about 30 miles short, and…

Eventually, you get so far north that it's just road, pipeline, bogs, and grasses.  It's almost like an alien landscape. …

We got into Cold Lake Alberta really late and parked at the Walmart to catch some Z's. The next morning,…