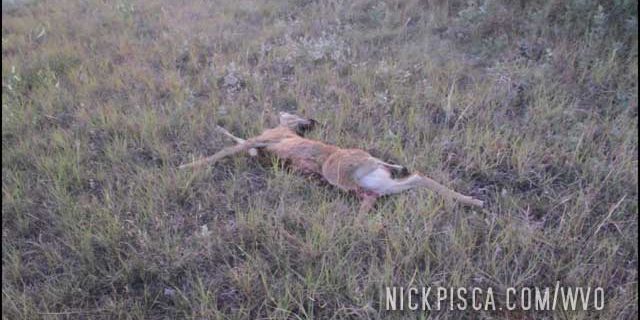 After eating and checking out those Tunnels of Moose Jaw, we headed west down the THC.  We have to drive through the night to get to the Rockies before sunrise.  Canada is so full of bugs. 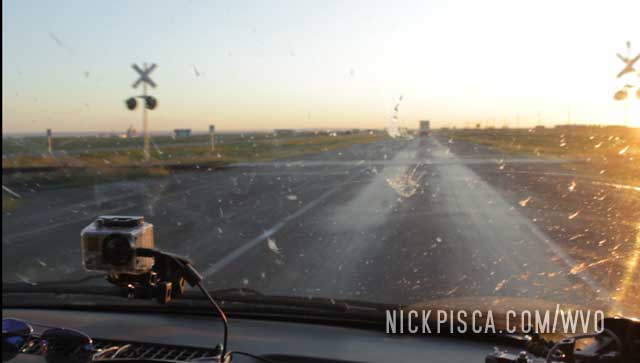 The sun was setting directly on the roadway horizon.  It was like staring directly into a solar flare. 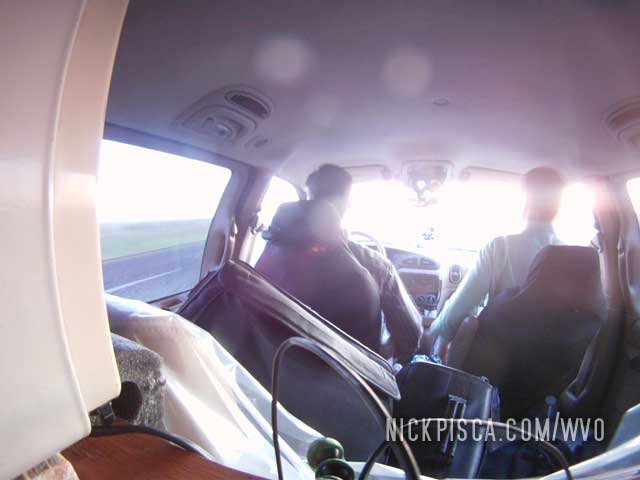 Then all of a sudden, a deer jumped out of the long grass in the median.  We had no time to react.  This is me yelling “Shit!” just as it sprung out in front of us. 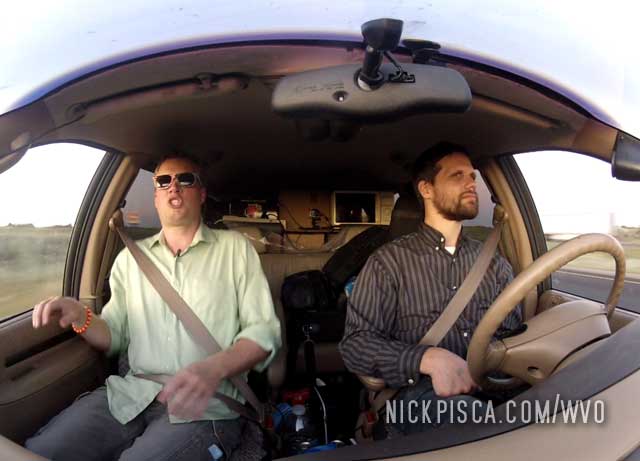 This is Glenn trying to avoid the deer, but it took a weird bounce and crouched down at the passenger side lights.  It was struck instantaneously and basically exploded.  Parts of deer and parts of the front of the van flew everywhere. 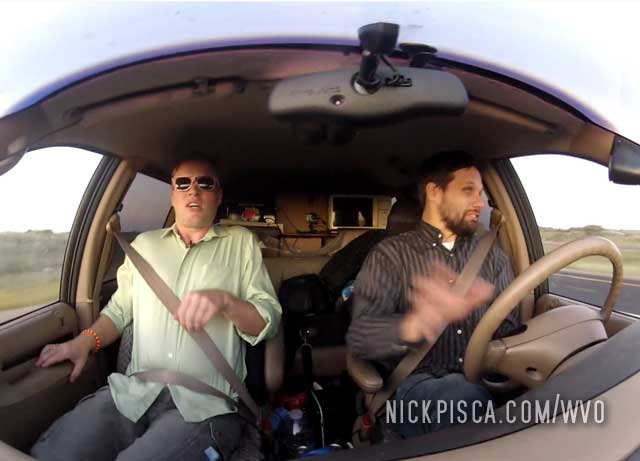 You can see the carcass sliding down the gravel shoulder on the image below. 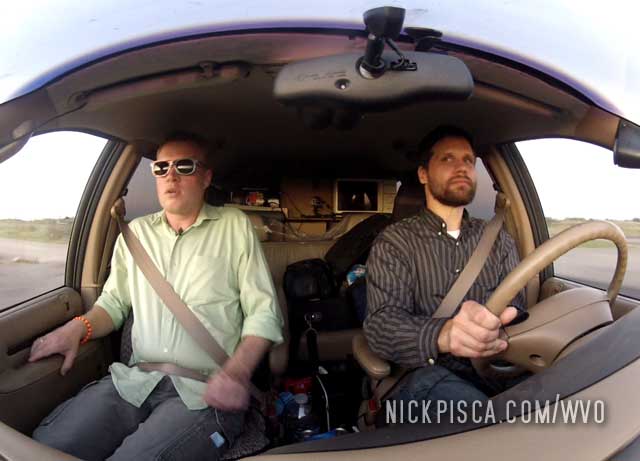 Well crap.  The sun was setting, and most of our light system looked destroyed.  We tested the vehicle and thankfully our headlights still worked. 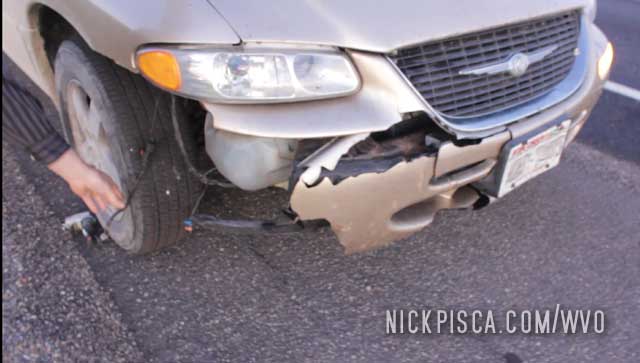 It didn’t suffer.   The deer died before it even stopped flying. 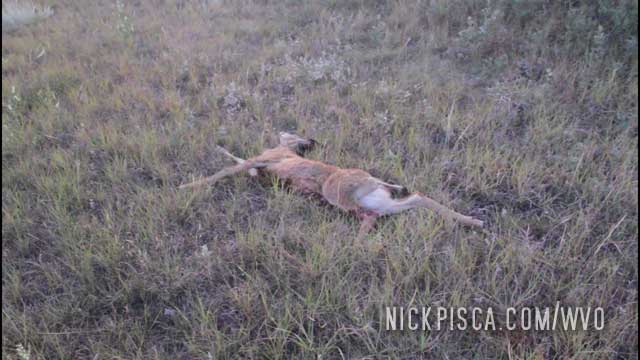 We gathered up all the pieces of the van as best as we could and put them in a bag. 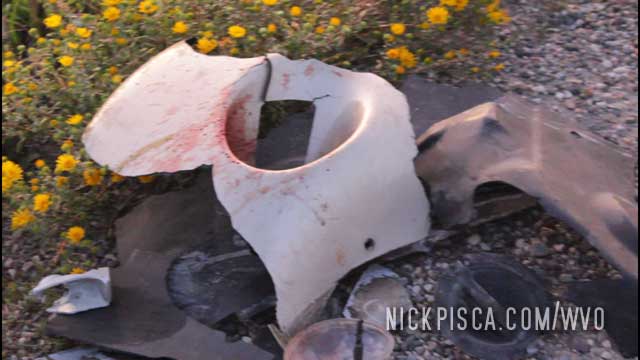 I immediately got on the phone to see if we could book a hotel room near an auto parts store.  We had to abruptly change our plans, in the hopes of finding a way to get this van back to street legal while finding a place to rest.  Even though it would mean backtracking on our WVO roadtrip, going back to Moose Jaw to stay at their Super 8 was the safest course of action. 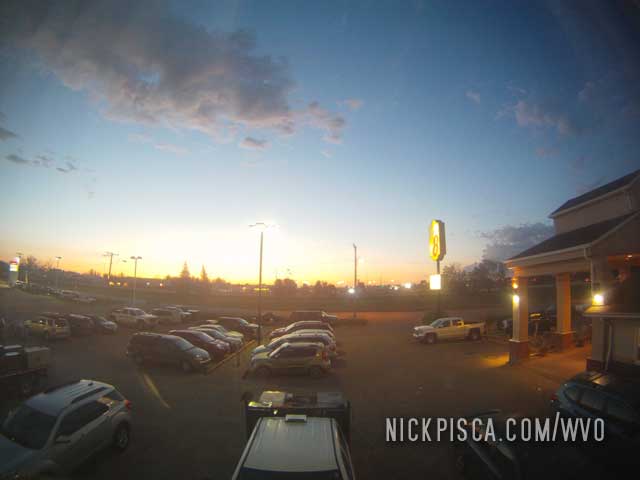 As we walked in to the lobby, there was a woman chatting with the staff.  When they found out we hit a deer, the woman asked, “Was it near Caronport?”  Apparently they have a deer problem nearby.

Fixing the Minivan Damage after Hitting a Deer

As we limped the van back to Moose Jaw, we lost more electrical systems on the way.  The dash and…

After getting a bite to eat at Rosie's, we strolled around the downtown area.  Moose Jaw is kind of in…