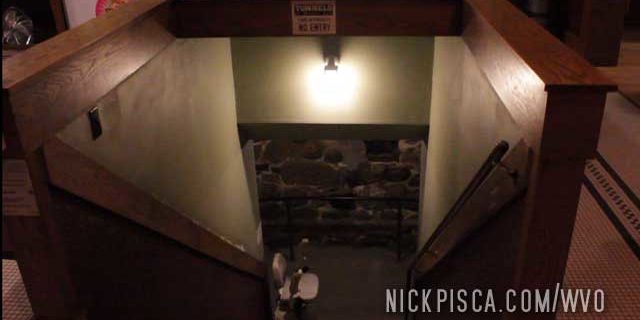 After getting a bite to eat at Rosie’s, we strolled around the downtown area.  Moose Jaw is kind of in the middle of nowhere, so the bypass didn’t kill off the city. 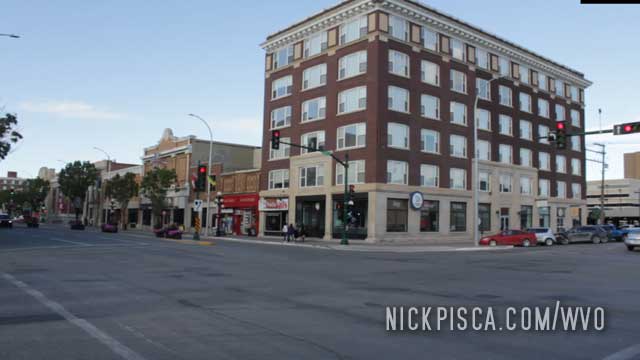 Holy cow!  An actual pay phone.  And it worked!  And it wasn’t cover in graffiti or urine!  Woo hoo. 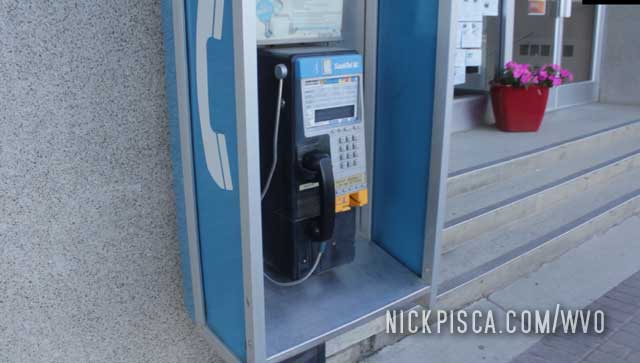 Just south of our restaurant was this place claiming to be the tunnels Al Capone used while he was in Moose Jaw.

We went in and asked if they were open.  They said they were closing in a few minutes.  We asked about their “tours.”  They said there was one tour left for the day.  At closing time….  Weird.  Well, whatever.  We’ll take their tour that is one hour long but starts when their place closes…

While we waited the last ten minutes before they closed, we walked around to check out their artifacts and evidence of Al Capone’s stay here.  Not that believable.

We got to meet our tour guide who walked us down the street to an neighboring building.  As we chatted with this kid, I detailed how the mere suggestion of Al Capone hanging out here was preposterous.

Glenn and I are from Wisconsin.  We have actual ties to the history of Al Capone, who regularly visited northern Wisconsin to get away from Chicago.  We was one of the Original FIB’s.

Also, Al was notoriously paranoid about everything.  When we were at the Expansion Museum, we learned that there wasn’t a road to Moose Jaw until like the 1940’s because some dude bought a car in Minneapolis and had to drive it back to Moose Jaw himself.  And there wasn’t enough roads so he had to drive across several prairies.

So, back to Al Capone, that means he had to take the train to Moose Jaw from Chicago.  And there is no way Al Capone, Mr. Millionaire, is riding a slow ass train to central Canada.  The moment someone recognizes him, they’ll just call the next stop’s police, and they’ll arrest or shoot him.  No way out on a train.

And I’m not digging on Moose Jaw, but it’s kind of tiny and in the middle of nowhere.  I find it hard for someone of Capone’s lifestyle finding his way up to this one-horse town.

As we explain our case, the tour guide directs us to the start of the tunnels.

Turns out this is some kind of reenactment tour, where they have actors put us in the times of Al Capone.  It was pretty entertaining.  If I had known it was all theatrical, I would have played along more.

At the end of the tour, they killed some woman.  We were guided back to the Tunnels of Moose Jaw storefront and out the door.

After eating and checking out those Tunnels of Moose Jaw, we headed west down the THC.  We have to drive…

The ferry from Sydney Nova Scotia to Channel-Port Aux Basques connects the Canadian mainland to Newfoundland.  It takes about six…