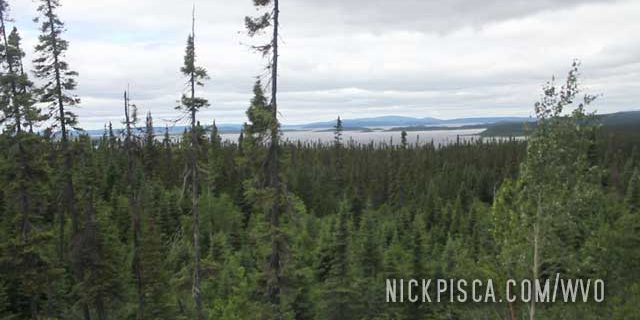 As a kid, I would look at a map of North America and notice interesting geographies.  One place that captured my attention was the crater of Lac Manicouagan. From space, the classic crater circle is easily recognizable.  The Labrador Highway runs along this massive crater (over 30-miles across) but due to the heavy forest and the lake’s enormous size, it’s almost impossible to see this lake in person.

Thankfully, there is a spot where the topography puts the highway high enough to see one edge of the crater.  Pretty cool. 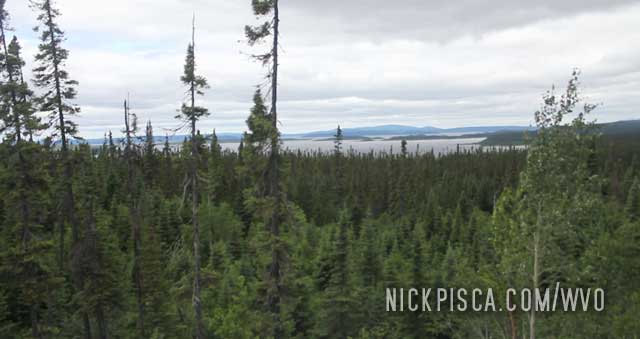 While driving up the Labrador Hwy, we noticed a handful of motorcyclists along side us every once in a while.  They tended to go a bit faster than us, but not by much.  One motorcyclist had this odd bicycle trailer.  He appeared to have some mechanical issues and was limping along.  Right after sightseeing the crater, we pulled off at a remote gas station where the motorcyclist happened to be parked.  He appeared to be struggling with something on his bike. 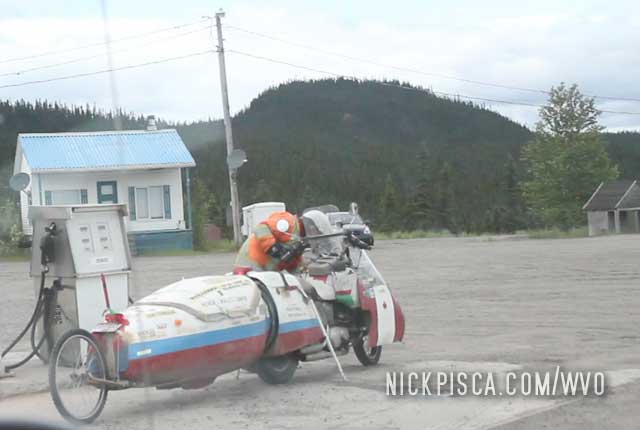 We walked up to offer some help.  It turned out to be Canadian Motorcycle Hall of Famer Philip Funnell!  What are the odds!? 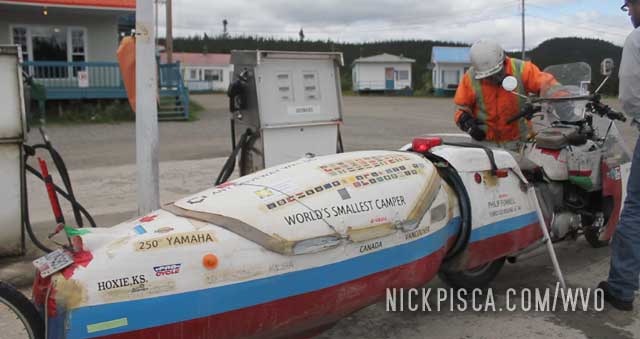 We talked to him for almost an hour.  He discussed a bunch of stuff, and wasn’t shy about jibber-jabbering.  I guess if you are on the road as long as him, you get the gift of gab.  He talked about his sleeper trailer and all his modifications for his cycle.  It was a pretty spiffy deal.  We talked about our veggie van and our mods as well.  He suggested we put locking washers, locking nylon nuts, and duct tape on all our loose bolts if we want to make it the rest of the way on the Labrador. ( In hindsight, he was RIGHT ON, because we often had to stop in each town to get new bolts from the ones that fell on the washboard gravel roads).

After a good talk, we took off.  That was the last and only time we met him.  It was 2015, and I think he said he as 80 years old at the time of our discussion.  As we drove down the Labrador, Glenn remarked how spooky it would be to sleep in that fiberglass “coffin,” as he put it.  He joked, Phil was getting up in age, and hopefully he can get that cycle back to B.C. without someone finding his corpse in the “coffin.”

Wherever he is, I wish him well.  If he did croak, I suspect for a diehard motorcyclist and roadtripper like Philip Funnell, dying on the open road would be the way to go.

We have finally made it to Labrador City, and not a moment too soon.  All the way from Thunder Bay,…

As we drove up the Labrador Hwy, our GPS was telling us to barrage Daniel Johnson in a few hundred…

After a one-year hiatus due to the Covids, we returned to WVO roadtrippin' in 2021!  It was a short trip…