Ever since I upgraded to R&D’s 90cc IP, R&D Injectors, and R&D Stage 1 dual filter setup on the rail, I was getting too much fuel to the cylinders than my little Hypermax kit could provide air.  I had some moderate EGT’s and mild boost numbers, and I figured getting a little more air in the intake might bump the boost up and bring the EGT’s down.  I considered running an innercooler or upgrading my exhaust to 3.5- or 4-inch, but after perusing several forums, I elected to buy DieselSite’s “Wicked Wheel 2” from R&D’s inventory.  It seemed like the easiest bang for my buck, without a lot of custom tube routing or fabrication. 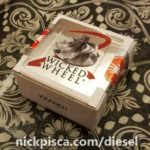 If you break the seal on a Wicked Wheel, you won’t stop pissing money for Diesel, cuz it’ll be too much fun driving your IDI.

IDI guys typically run these in the ATS or stock turbo setup in the truck, which is a more tried and tested platform than the rarer van kits, like the Van Banks or Van Hypermax.  I was a bit worried when I bought this WW2 because all the information on DieselSite’s website said this was compatible with the ATS setup.  However, R&D must have tried this on a Hypermax Pulse system, because on his site, he wrote:

He must have slid a WW2 on the hypermax pulse turbo shaft and mated it with the turbo housing, to confirm it would reside without any clash.  Thankfully, his research was spot on, and I confirmed it myself (as shown in the video below) that a WW2 works on the Hypermax Pulse system.

Here is the video of my install procedure:

DieselSite and R&D have some lofty claims about the capabilities of these WW2 turbines. I tend to keep such audacious claims at arms length, because almost all enhancement upgrade claims from manufacturers are too good to be true.  But I figured what could it hurt: if it doesn’t improve anything, then I’ll just be out $200; If it helps, then it’ll be worth the money; If it makes things worse, then I’ll just downgrade to the old Hypermax turbine.  Seemed like I didn’t have much to lose other than money and some time.

While I’m on the topic of installation time, replacing a turbine on a van turbo was only an hour job.  VERY EASY.  The van has only a few repair advantages over the IDI truck, so I’ll take what I can get.  DieselSite’s instructions (which by the way, are pretty lackluster) request the mechanic remove the whole turbo from the truck bay, which might be prudent for someone who will have to lay over their engine to access the turbine shaft, and conduct the WW2 replacement on a workbench.  But since my van doghouse allows for substantial access to the turbo kit and rear of the engine, I didn’t see the harm in doing the turbine swap on the pedestal. 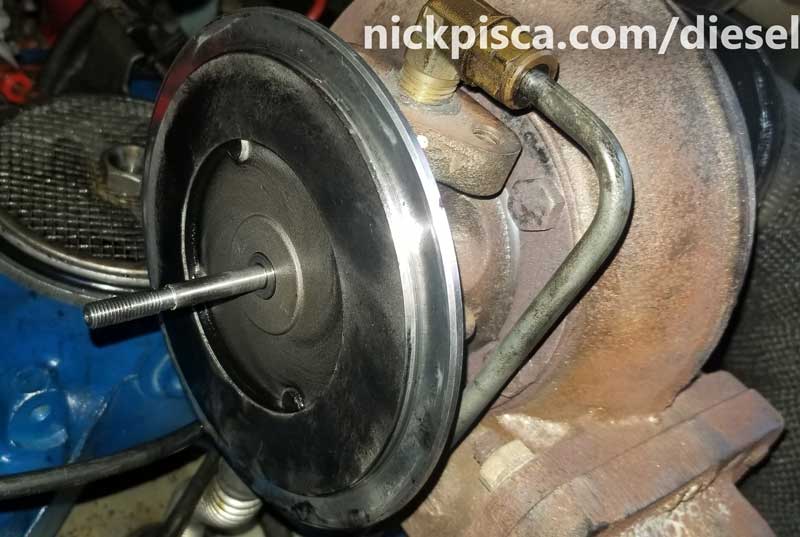 Hypermax Turbo without the turbine (see video above)

Separate the down-pipe so you can hold the back side of the shaft when removing and installing the turbines.

Back to the topic, I took the manufacturer claims with a grain of salt.  I figured whatever improvement I’d get from a simple turbine replacement, it would be pretty minor.

I was completely wrong.  The Wicked Wheel 2 completely transformed my Hypermax setup. 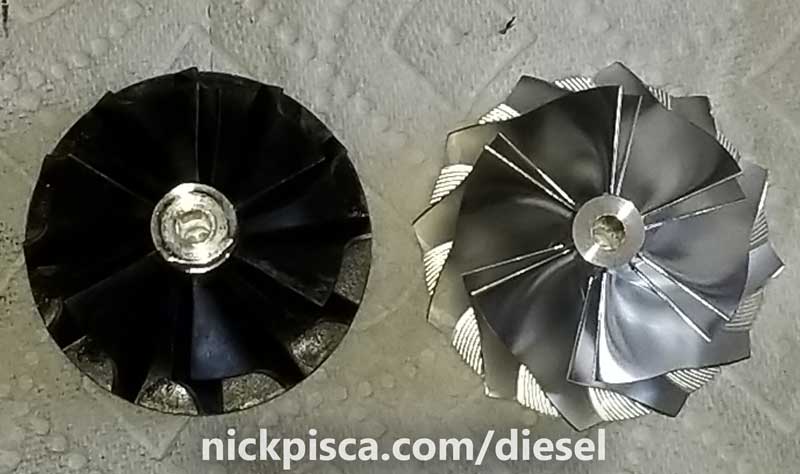 Standard Hypermax Turbine (left) and Wicked Wheel 2 (right). The WW2 is substantially wider, taller, and dips into the turbo housing much further, allowing it to suck more air into the intake hat.

Before the WW2 upgrade, the Hypermax kit was designed to max out at 11psi hauling the heaviest load up a major grade.  Day to day driving  would typically max out around 4-6psi on flat straightaways and city driving.  I often never reached the mythical 11psi maximum that Hypermax states in their documentation.  Also, with my R&D injector and IP upgrades, I was already reaching 1100 deg F EGT’s with moderate inclines, forcing me to lay off the accelerator in extreme cases.

After the WW2 upgrade (without any major tweaking of the tuning and timing yet), I was able to achieve 10.0 psi boost on my first test drive on a flat highway with an empty van.  With some timing adjustments (set to 6.0 deg BTDC at the moment), I was able to achieve 11.0 and 12.8 psi boost on a flat highway with an empty van at WOT.  Also, the EGT’s are 150-200 deg F lesser than before, keeping the EGT’s under 1000 deg F for the duration of my initial WOT test runs.  I haven’t even tried taking the van up any hills yet to see if the boost surpasses 12.8 psi.  That is very impressive, because it appears to have exceeded the design capabilities of the Hypermax kit with a simple part replacement.

Also, the city driving has substantially improved as well.  It spools up much faster, and it basically drives like a car now.  It would probably beat my Jetta TDI off the line now.  I’d estimate the earlier spooling to something about double the boost than it was before.  It’s hard to quantify Los Angeles city driving in any sort of regimented way, but the snappy performance speaks for itself.

Overall, I’m very impressed with the WW2. For a mild amount of money (just over $200) and an hours-worth of wrenching time, I was able to get more boost than I ever attained with the standard Hypermax setup.  Also, it provided lower EGT’s, which will help in the longevity of my newly-rebuilt IDI engine.  Even though I haven’t tested the beast up some of my nearby California inclines, I’m considering bringing my IP down a flat on the fuel screw.  While it’s sexy to have that extra boost, I’m not in the business of making my IDI van a hot rod.  Instead, I’d like to keep the EGT’s at a minimum while getting above-moderate boost while preserving fuel economy.  I think turning it down a flat will afford me those results.  I’ll post more as I play with the timing more and drive it around.  But in the meantime, I’m going to slurp us Diesel like it’s 1999, cuz this beast is so much fun to drive around in.

I turned the IP down a whole flat and kept the timing at 6 deg BTDC.  I drove it around the city  to test if the lesser fuel supply would impact the turbo spooling.  I wasn’t able to take it on the highway due to the traffic.

Just beating it around town, I was able to obtain 8.6 psi and 9.8 psi with around 3/4 throttle.  I would have liked to have tested it on a longer duration, but I kept rapidly catching up to the traffic in front of me.  I’ve never had that problem with my IDI before!

The smoke disappears once the turbo spools, but I probably should invest in a puff limiter if I want to keep it where it is.  I will likely bump it down another half flat just to make it easier to drive around Los Angeles without attracting the fuzz, and also to prepare for my upcoming high altitude road trip.  I’ll be exceeding 10,000 ft elevation, so having a slightly lower fuel ratio would help make the drive a little easier.