Differences between the IDI Van and IDI Truck Engines

There are some small but important differences between the components of an IDI Van and IDI Truck engine.   Any IDI engine found in an Econoline, E-250, E-350, Clubwagon, RV, van-style hauling (e.g. U-haul) vehicle, Campervan, Quadravan, and Supervan is considered a “IDI Van” engine.   An “IDI Truck” engine is found in any Ford pickup F-250, F-350, Centurian, tow-truck, truck-style U-haul vehicle, IDI-swap Bronco, and any vehicle with a long hood.   Here is a comprehensive list of the differences: 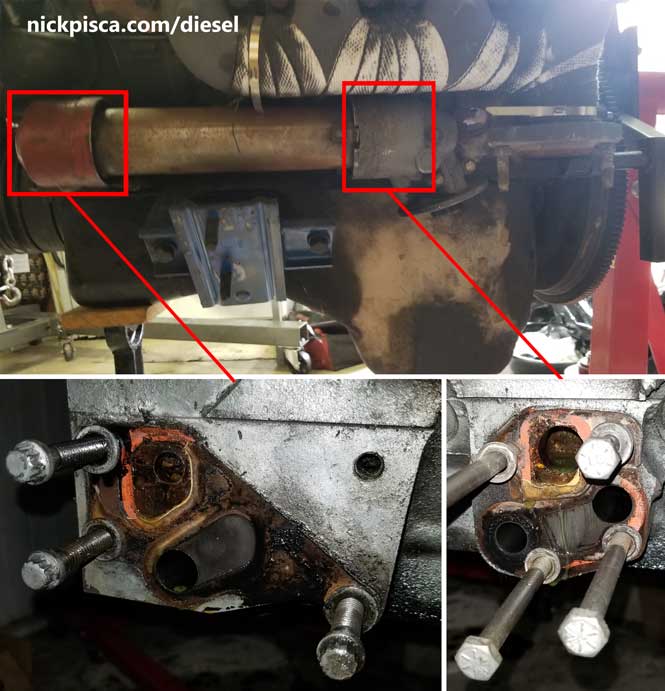 When asked, the average IDI guy could tell you that the oil cooler is the most prominent difference between the truck and van systems.  This isn’t necessarily the truth.  The oil cooler is actually the same between the truck and van, but the headers that mount the cooler to the block are slightly different.  This is the reason why when you order a new set of oil cooler gaskets (not to be confused with the o-rings), there are three gaskets instead of just two.  Depending on what oil cooler headers you have, you might have to use one pair of gaskets versus the other pair.    Paradoxically, because the headers are slightly different (the truck model has deeper headers, as shown in the image to the right), it is possible to uninstall and reinstall the oil cooler assembly on a van without having to pull the engine.  In general, the vans are notoriously difficult to work on, but this oil cooler feature is one of the few benefits over a truck, because they have to lift the engine to get their coolers out. 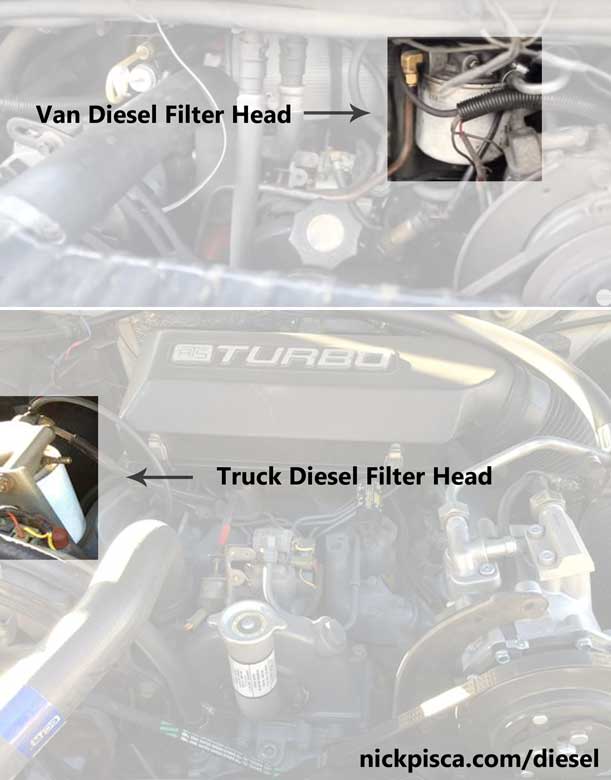 The filter head is interchangeable between the truck and van, but what is different is the location.  The truck has it mounted on the passenger side of the engine bay, whereas the van has it mounted on the driver’s side of the intake manifold.  Since the filter is located elsewhere, that also means that the GP harness wiring bundle is slightly different, because the Water-In-Fuel (W.I.F.) and Fuel Filter sensor wiring is routed differently.  On a tangential note, when I installed my Hypermax turbo kit, they provided a blue spacer plate to slightly move the filterhead forward. 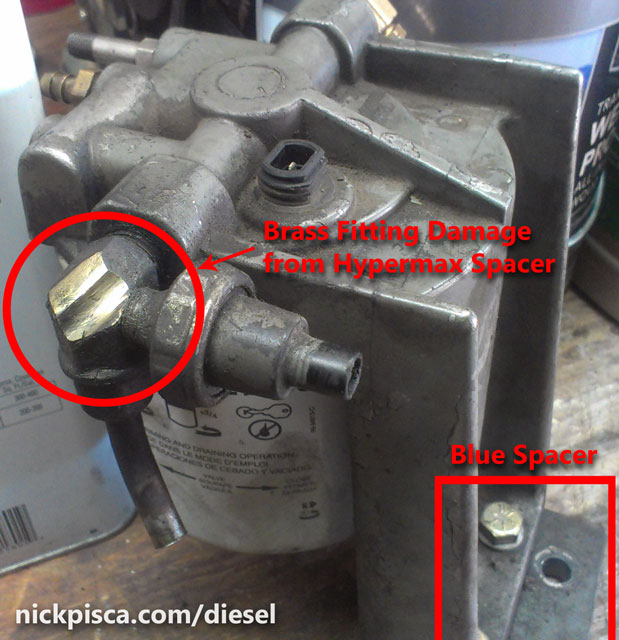 Since 2015, I have been running an R&D IDI Performance Stage 1 filter assembly on the frame rail, so that I could free up more room in the engine bay.  When I removed the stock filter, the Hypermax space forced the filter head up into the rear heater core metal lines on top of the engine bay, which ended up rubbing the brass fittings down to almost nothing.  This design flaw is something to take into account if you install Diesel Filter spacers when installing the turbo kit.

While the trucks have their vacuum pumps located on top of the accessories, the vans have their pumps situated near the passenger side frame rail.  There is not a lot of clearance, and it’s a pain to remove.  Also, the mounting bracket is poorly designed.  When you try to tighten down the vacuum hose, there is a mounting bolt that protrudes into the rubber of the line and makes it very difficult to tighten down a hose clamp.  This is a constant source of consternation, because it often rubs a small hole in the line, thus ruining the pressure.  In a future post, I’m going to detail how to modify that mounting bolt to be a countersunk so that it doesn’t conflict with the vacuum hose.

Also, due to the close proximity limitations of the frame rail, you cannot run a Powerstroke (P.S.D.) vac pump on an IDI van.  We know this because in 2013, we got stranded in Prudhoe Bay Alaska because our vac pump died.  The mechanics up there, who were very well versed in diesel engines like the IDI and PSD, were trying to fab up a way to run some PSD pumps that they had in stock in their NAPA, because the closest IDI pump was in Fairbanks.  After several hours of fiddling, the tallness of the PSD pump clashed with the frame rail, thus not allowing us to leave the town until the IDI pump was flown up two days later. 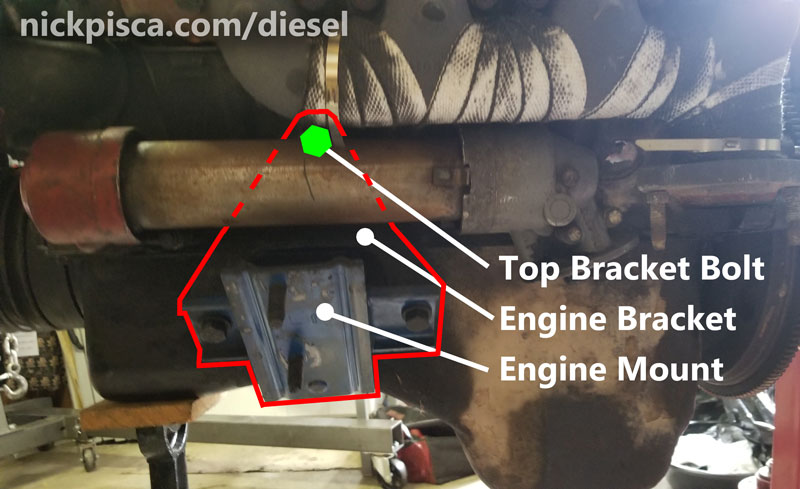 The frame rails are slightly further apart on the van.  This was done to situate the engine lower than the truck engine, because unlike the truck chassis, the van engine bay has a fixed ceiling firewall.  To accommodate this wider frame rail design, the motor mounts are different and so are the mounting bracket that affix the mounts to the block. Also, the driver’s side motor mount bracket is very different than the truck, because it has to slide in the tiny gap between the oil cooler and block.  The truck oil cooler sits further out from the block, and affords the truck motor mount bracket more room to occupy.  You can see in the image to the right how the van motor mount bracket sits behind the van oil cooler.   Take caution when buying van motor mounts; I have had several incorrectly-shipped mounts because most vendors cannot tell the difference.  I will find photos and part numbers of these in the future and post them here. 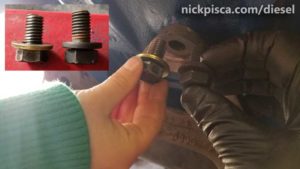 One hot tip for you IDI Van guys:  If you have your oil cooler off for some reason, take the time to remove the topmost bolt from the motor mount bracket on that same side.  Replace it with a Grade 8 bolt that is 1/8″ shorter, but the same head and thread size.  Why?  Because the stock bolt is too long to pull out with the oil cooler installed.  It butts up against the side of the oil cooler, and if you ever need to remove that bracket for some reason in the future, at least now you can do it without having to install new oil cooler header gaskets and draining your oil and coolant everywhere.  I’ve made a dedicated article explaining precisely the process and identification for this replacement bolt here.

While researching for months about turbo kits for my van, I came to the conclusion that of all the truck turbo kits on the market (used or new), only ten percent of the kit could be used on a van.  The problems are the limited height of the engine bay relative to the top of the intake, and the cramped space between the block and the doghouse to route up- and down-pipes.  Combine that with the extraordinary heat generated by these units and the proximity to passengers without a firewall, and it’s a recipe for fire or failure.

A while back, I wrote these words to a fellow FTE member about his plans for a van-truck-turbo conversion, back when these topics were fresh in my memory:

I read the ATS truck setup won’t work in a van for the following reasons. When I shopped around for a van turbo kit, I remember the truck air filter housing opening from the top, and with the van engine compartment having a roof, it couldn’t be opened. Also, the intake hat is conjoined with the housing, so using the air intake was totally out. Also, I read the turbo mount is too tall, so the turbo would clash with the roof of the engine compartment. The mounts for the turbo all have to be van-specific, otherwise they don’t fit either. The up pipes won’t fit in the doghouse, nor the down pipe.

Overall, when I shopped for a van turbo kit, I eventually stopped looking for a truck kits, because it would involve fabbing up all my own brackets, exhaust, mounts, air intake, etc. Pretty much the only thing that was interchangeable was the turbo itself. It seemed like a waste to buy a truck kit when I’d blow over a grand on drawing up and welding up all sorts of things.

On a different note, I think the manual and C6 trannies warrant a different up- and down-pipe configuration, but that’s not confirmed. I know on my hypermax van kit, they asked for what tranny I had, probably to deal with the shape of the up-pipes… 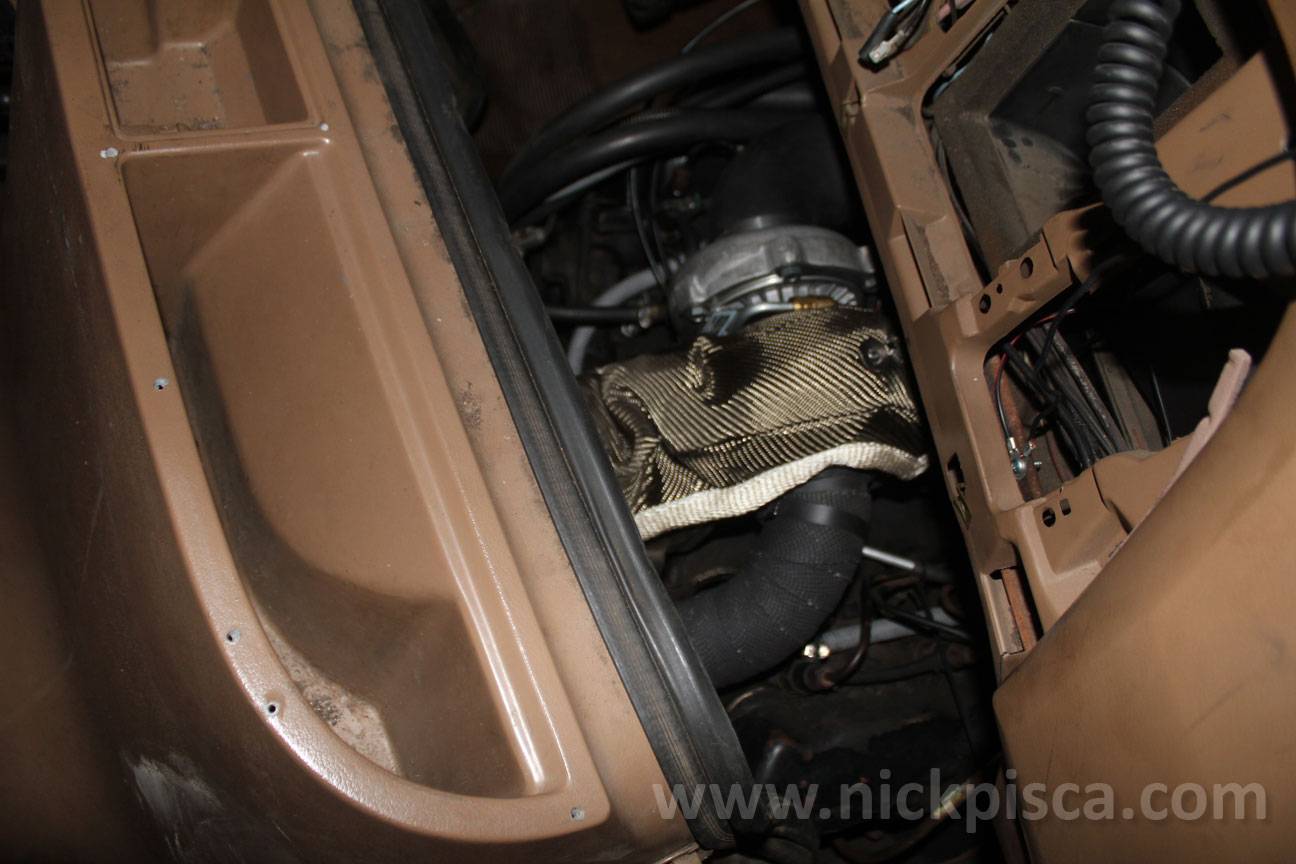 …Make sure your turbo isn’t too tall…. come to think about it, I remember JohnIDI saying the truck kit was too high and it would clash with the top of the doghouse and underside of the engine compartment.

If you wanted, you could measure the height of the turbo from the top of the valley pan, then I could measure it on my engine. If it clashes, then you will know. Regardless, I’m sure the hump in the doghouse pocket is probably there for a reason…. see this image [to the right]:

Needless to say, I was more optimistic in those days about the potential for custom fabbed remote turbo setups or custom mods to an existing truck setup.  Considering the rarity of used complete turbo van kits, I still recommend spending the extra money to buy a new Banks and Hypermax kit, while they still offer this product.

Naturally, this could be extended to the topic of innercoolers and their respective tubing.  The trucks have plenty of space to run innercooler piping and mount it up in front of the condenser.  The owner of R&D IDI Performance once told me that he was contemplating how to run an innercooler on a van project he was developing, and it would likely run a heat exchanger up to the front and mount the innercooler inside the engine bay.  I like this idea, but considering there is almost already no space in the engine bay, I’d find it difficult to find a way to mount that.  And an undermount innercooler is a recipe for air intake damage from ground debris.  I’m working on a plan to innercooler my engine after the 7.3-rebuild project, and I’m considering doing a second battery delete to find room for the innercooler and air intake filter housing.  But that is for another day.

Drivers side exhaust manifold.   The truck EM is different and flows upward from the head; the van EM flows outward and down.  If you are doing a 4×4 swap on an Econoline van that is using the van frame, you need the drivers side exhaust manifold and oil cooler from a pick up to provide clearance for the front driveshaft.   I have never personally confirmed this assertion because of all the time I have researched van IDI’s, I have only seen one Quadravan conversion retaining the van frame, but the logic of this manifold differentiation appears to be sound.

Notice:  The information written here is primarily firsthand experience from my ownership of four IDI Vans.  There may be cases of other minor IDI Van differences that are not mentioned here.  This is the best I can do from five years of experience wrenching on these beasts.

If information is cited from this article, please properly give credit to this website either by written citation or hyperlink (preferred).