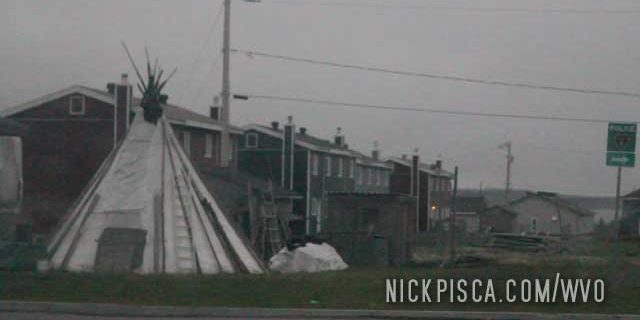 One of the first major destinations for our 2015 WVO Roadtrip was Wemindji Quebec. Wemindji is a wonderful town. Canadians are nice, but Wemindji residents are even nicer.

Our goals for the Wemindji visit were two-fold. One part was seeing this northern First Nation town. We had researched a lot of this, and found some interesting history here.

The second part, we wanted to use Wemindji’s location on the James Bay to “cheat” a trip to Nunavut. For the longest time, we were trying to figure out how to get to the Canadian territory of Nunavut.  It’s the only place in Canada that cannot be driven to, except by ice road.  We are not prepared to drive this veggie van through an ice road, so our only option is to fly up to Nunavut.

Except, I found a loop hole.  After reviewing several maps, I found an interesting fact: Any island in the Arctic Ocean that is disconnected to the mainland at low tide is considered part of Nunavut.  That rule also applies to any island in the Hudson Bay, as well as the James Bay.  So even a tiny island off the coast of Wemindji is considered part of Nunavut.

Knowing this, we wanted to go out on a boat into the James Bay and find an island, and officially visit Nunavut.  We had contacted a woman representing the burgeoning tourism “industry” in this town, and she said she would set us up.  But just in case she flaked out, we also brought a small raft and outboard motor to get us out in the bay.

As we drove into town, the local police pulled us over.  They were really cool about it, and said that we didn’t violate any law, they just wanted to talk to the people in the van with California plates.  They must have spread the word about our arrival, because once we got to the shoreline, people were coming out of the woodwork.  Eventually our tourism agent appeared with a man willing to give us a tour of the James Bay.  Awesome! 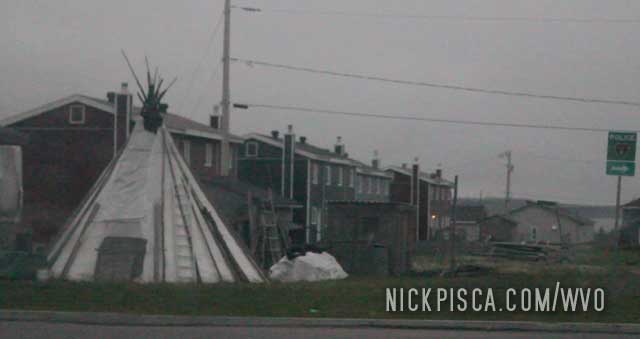 After our tour, we ate at the Wemindji cafeteria.  Most of these northern towns are subsidized by the Canadian government, and have some great food.  The assistant mayor heard of our arrival and sat with us.  He gave us a book about the history of Wemindji and some other souvenirs.  The town was really special.

They wanted us to stay for the night and join in a tribal celebration. They were going to harvest some exotic meats for us, but unfortunately we had a lot of miles to go tonight.

We wanted to use Wemindji's location on the James Bay to "cheat" a trip to Nunavut. For the longest time,…

There is about a 100-mile gravel road that gets you from the James Bay Road to Wemindji.  Here is the…

270573. Trans-Canadian Hwy. 4:30pm Saturday We encountered the same pressure problem and found our VO pump to be functioning intermittently.…