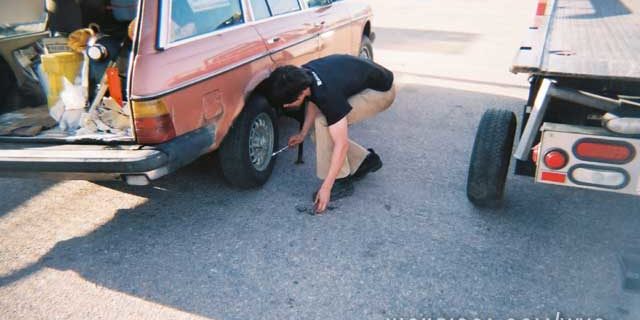 Before we left Wisconsin, we had some concern over the reliability of the rear tire treads.  It may have been the load in the wagon forcing the tire to wear on the insides, but some of the steel was starting to show.  We made a defensive decision and opted to change the most deteriorated tire there with the spare and buy new ones in Los Angeles.  We plan to stay in LA for at least a day, maybe two.

Some tire places were still open, but were asking ridiculous prices.  Plus we didn’t have a lot of time to waste shopping around, so we managed to pry the lugs outside a local shop.  This was good thinking, because if we encountered a problem we could still purchase their services. 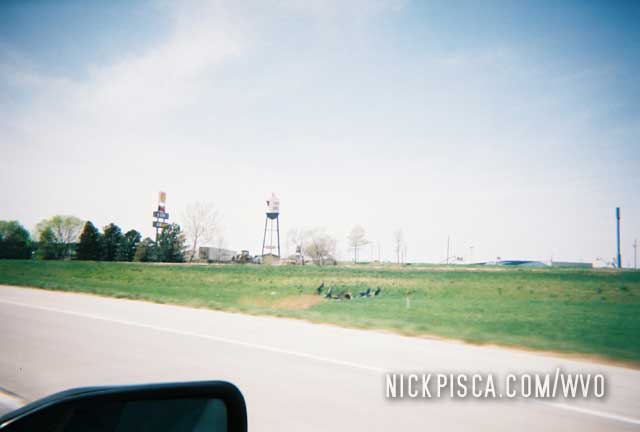 Mercedes Benz has a sketchy jack to put it mildly.  To describe it, the jack is a tube with a crank on the side.  There is no stand or bas, so you just jamb the connection into the Benz’s jack-hole and balance the stump on the pavement.  Glenn claims it’s really rational and because it seems to level itself as you crank. I think that’s a crock and with my remedial engineering education, I know that applying unnecessary moment (rotational) force to a unstable situation is problematic.

Knowing this, I go into the junk piles behind the auto shop to scavenge for wood for blocks.  Not to set under the car like jack stands, but to place behind the wheels to aid the parking brake and keep the car from rolling.  After I force the blocks around the front tires, I return to the rear of the Mercedes while Glenn elevating the automobile. I remember this vividly because it was prior to some strange sounds and behavior coming from the underside.  Glenn almost had the passenger side wheel off the ground when I hear a hissing and watched the driver sided start to settle in a matter of a second. I made a comment, but he stated that the Mercedes suspension leveling system will fix itself when the motor starts. 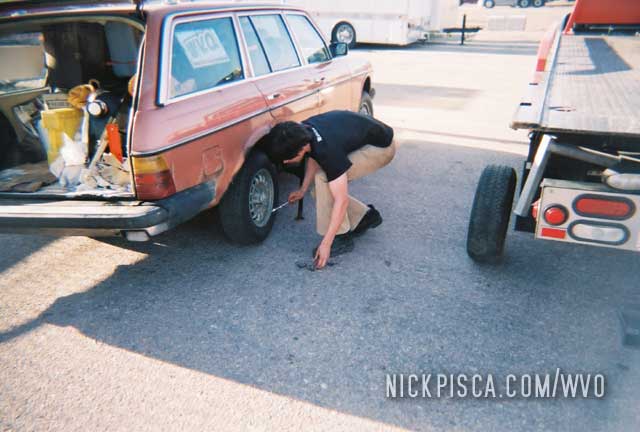 The spare now installed, I started the drive to Denver, losing only an hour in western Nebraska.  The suspension still hadn’t raised, but Glenn asserted that it would eventually elevate. Only a mile or so from our previous stop and the the newly-installed spare explodes.  Luckily we were only a quarter mile from the ext for Paxton, NE and there stands a convenience store and Days Inn with a monster parking lot.

Once parked, it was apparent that our “spare” was a poorly completed re-tread, but still managed to hold air.  Also, the suspension still hadn’t raised and after further inspection there was no fluid returning to the reservoir, indicating that there has to be a leak.  Glenn suspected a certain type of valve, with which he had previously purchased but regrettably didn’t bring.

This left us at an impasse.  Since we are on the cusp of the Mountain and Central Time zones, we had to decide on whether to return to relatively-large Grand Island or attempt to make it to Denver.  Mercedes dealerships are not ubiquitous American establishments. If I could contact a dealership in Denver before 7pm Central time, they may be able to supply us with a special hydraulic fluid on a Sunday (far fetched but who knows).  We have to get this fluid now, otherwise we are hung up in western Nebraska until Monday. Also, there are not tire places open in Grand Island on Sunday. If we get a flat on the way to Denver, we are stuck in a grassy desert hours from help.

While Glenn was diagnosing problems in the dark, I promptly did what i could–grabby my computer.  I stormed the hotel lobby and inquired about the possibility of internet access. We had already decided to get a room, so the staff was more than helpful, even letting me use the lobby phone while I surfed the net for shops.  Unfortunately, no dealership was open and wouldn’t be open until 9am Monday. But I did find a Firestone Tire Center with Sunday hours until 5pm in Denver.

After some time diagnosing and putting the bad tire to replace the de-treaded spare, it was too dark to make real solid changes.  We set up shop in the room and proceeded to contact contributors, to explain the delay, and post messages in the Mercedes forums, to get some answers on the Suspension Leveling System, turns out those leveling systems are a good concept but once they have problems, you have problems.

Glenn found a series of schematics in pdf format on the internet, studied them in depth and saved them to my desktop.  We would wake up at sunrise to make our move.

It seems like every time we pass through Mesquite, we have some kind of mechanical failure.  It's really awful luck.…