Home » 2012 » Some Asshole Detaining us at the Osoyoos Border Crossing » 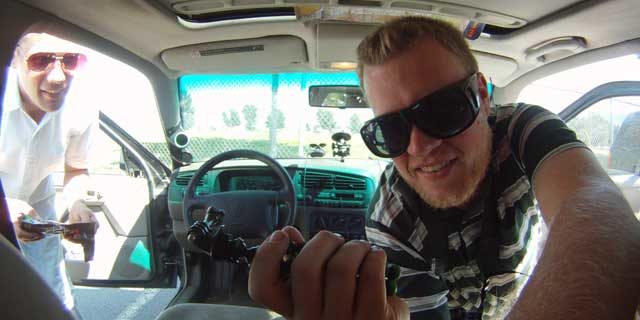 It was getting late, and we had to get to the Osoyoos Border Crossing before dark.  This was not an all-night crossing.  We drove through some pristine Canadian wilderness and got close to the station. 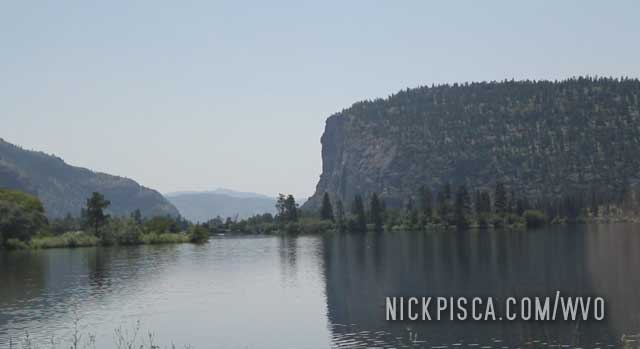 Now, I would have more photographs and videos of this US crossing, but things did not go our way.  Long story short: The US Border Agent deleted much of our files and detained us for 6 hours.

We drove to the border station thinking nothing of our setup.  We’ve crossed the US border so many times in the passed with veggie oil in the back, without any issues.  We crawled our way to the agent and he took our passports.  Everything seemed normal.  Then he directed us to park near the station.  No biggie.  We’ve been searched before, and once they realize it’s just vegetable oil, they let us go.

But this was different.  They put us in a room and made us sit for a while.  Then they called us in to talk about the cameras.  We always film our roadtrips, so there are microphones and gopros and DSLR’s and memory cards and hard drives everywhere.  They are literally suctioned to our windshield.  We didn’t conceal this fact.  It was obvious.

They accused us to filming the border crossing and planned to sell this footage to terrorists.  I was shocked.  They spent hours going through all the SD cards and hard drives looking for any footage of us filming this gawd-awful remote border crossing.  We tried to aide them in deleting these files, but they wouldn’t have it.  They literally just wiped several cards which contained hundreds of photos and pictures of our stay in British Columbia.

They even considered charging us with the “crime” of filming the border.  They claimed that was “illegal” and it was posted, but we didn’t recall any such posting.  In fact, you can go to Google Maps Street View and review that border area, and there is not any posting limiting photography.

The shocking thing about this was, if we were to believe this hairbrained theory from the border agent, then we must have been the most incompetent reconnaissance people of all time.  Instead of hiding our cameras and hard drives in covert areas on the car, we had them suction cupped to the windshield and windows.  A DSLR was slung around my neck.  It was obvious we were tourists filming a road trip.  But no, the agents twisted everything we told them to justify their idiotic conspiracy theory that we were aiding the terrorists.

At the end of the 6-hour detention, they threw everything into the car and told us to get out.  There was so much of our stuff destroyed, that we couldn’t even sit in the chairs.  They were excessively rude and insisted we get out as soon as possible, but it was too hard to drive.  We opened the trunk to see all our stuff ransacked.  I found one of our hard drives just millimeters from the large speaker magnet.  I told him that magnets can destroy hard drives, but the agent was a total asshole and insisted that is only if the radio was on.  I was shocked at his stupidity.  The magnet is still magnetized even if the radio is off.  One of our drives was destroyed, but one survived. 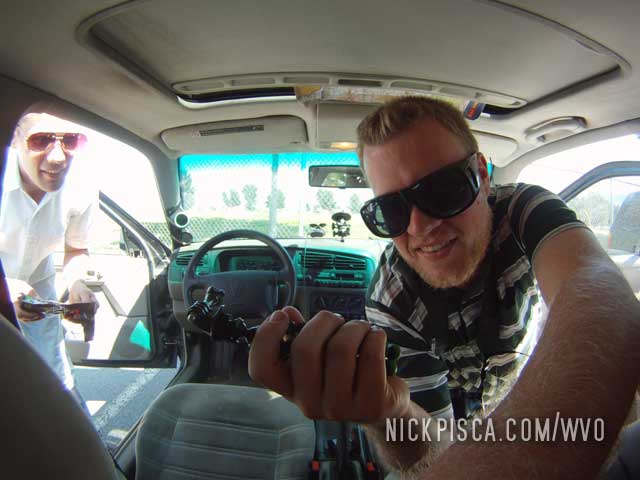 We finally got enough of the piles of stuff out of the front seats so that we could drive a few blocks to the nearby town of Oroville.  There, we spent about an hour cleaning, searching, inspecting,  and rebuilding our film, veggie oil, and automotive apparatuses.

The US Border Patrol near Oroville is full of assholes.  There was one nice old guy, but the rest can suck a dick.

We were supposed to spend the day sightseeing in central Washington, but due to this unwarranted search and detention, we headed south to Tonasket to reassess our plans. 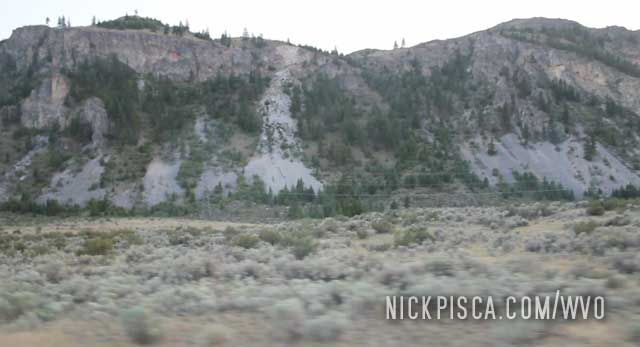 We wanted to go on the Chief Joseph tour, but since some jerk at the Oroville US Border crossing detained…

We cruised down Route 5 from Kamloops passed Walloper Lake to Penticton. As we pulled into town, we noticed something…