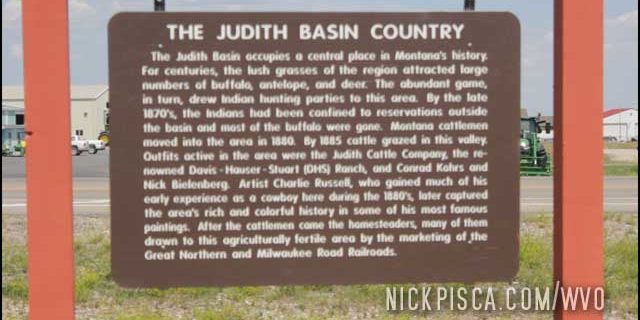 “The Judith Basin occupies a central place in Montana’s history. For centuries, the lush grasses of the region attracted large numbers of buffalo, antelope, and deer. The abundant game, in turn, drew Indian hunting parties to this area. By the late 1870’s, the Indians had been confined to reservations outside the basin and most of the buffalo were gone. Montana cattlemen moved into the area in 1880. By 1885 cattle grazed in this valley. Outfits active in the area were the Judith Cattle Company, the renowned Davis – Houser – Stuart (DHS) Ranch, and Conrad Kohrs and Nick Bielenberg. Artist Charlie Russell, who gained much of his early experience as a cowboy here during the 1880’s, later captured the area’s rich and colorful history in some of his most famous paintings. After the cattlemen came the homesteaders, many of them drawn to this agricultural fertile area by the marketing of the Great Northern and Milwaukee Road Railroads.” 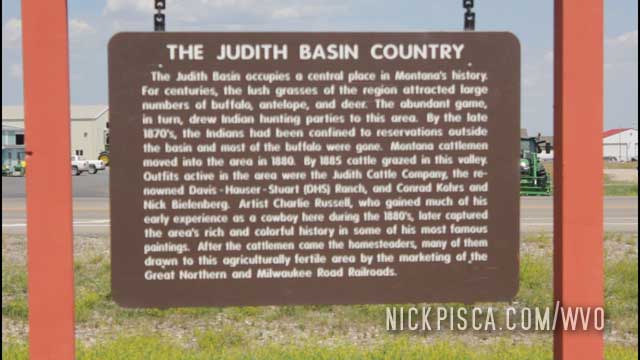 To summarize, the native people were displaced, wealthy people moved in, the indigenous wildlife was exterminated, and let’s stop worrying about what happened prior to 1900.

Lewistown is a pleasant place along highway 87. The downtown looks like something out of an old west movie. We…

After several days of driving north from Los Angeles, we got to Peace River and decided to find a hotel. …