Aligning the IP Timing, Camshaft, and Crankshaft Gears on a 6.9 / 7.3 IDI Engine

There is a lot on the net about alignment of the IP, Cam, and Crank gears, but I thought I’d toss in my 2 cents.

When working on the crank, cam, and/or IP, there may be a point in the process where the gears need to be removed.  When reassembling the engine, these gears have to be meticulously realigned, in order to ensure proper engine timing.  Then these gears are covered up by the Front Plate (aka Front Cover) and the IP Gear Housing. 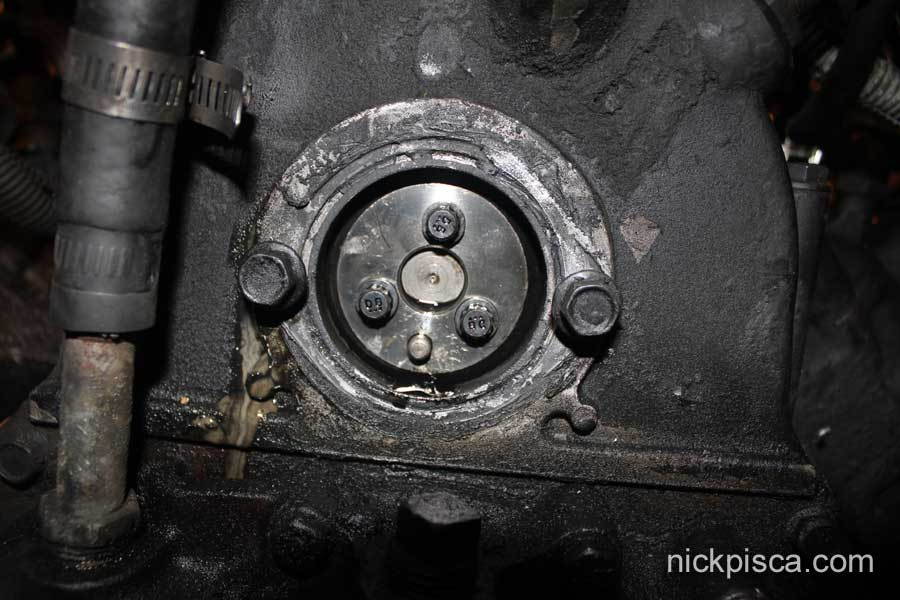 If a person can manage it, the best course of action is to never remove the gears from their positions.  For example, if one has to remove the injector pump, they do not need to pull off the IP Gear House cover.  In fact, they can just remove the 5/16″ head bolts on the timing gear and the IP mounting nuts, and they can pull the IP with the Gear in the housing.  Since the housing closely surrounds around the gear, it won’t hop a tooth, because there isn’t enough room to clear a tooth.  But if that person lifts the gear housing off, then they run the risk of accidentally bumping the gear and skipping a tooth.  And that would result in incorrect timing and potentially major issues.

Now some people claim they can find the timing location on the cam gear with the front plate cover installed.  They use mirrors and dental picks to feel for the “Y” mark or “O” divot in the cam gear.  I find that really hard to believe, because even if you can “feel” for the divot, it’s another animal trying to match that with the IP gear.  And there is not a lot of room between the front face of the cam gear and the front plate cover.  Maybe 1/4″, and it’s buried deep behind the plate. 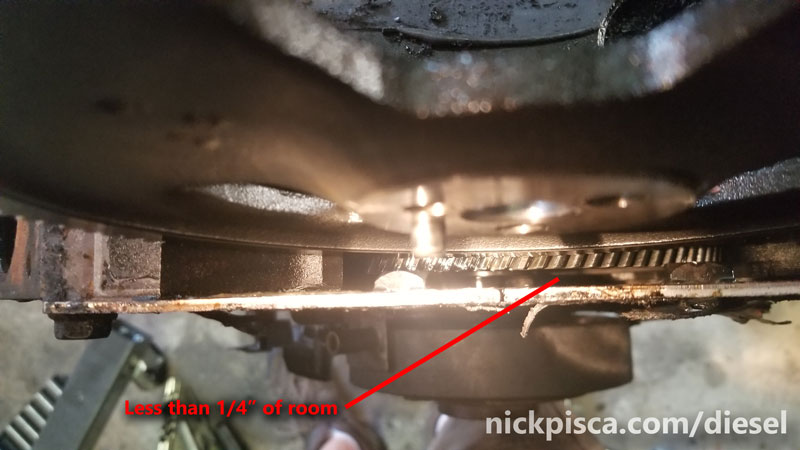 There are some jobs that require the removal of gears no matter how hard the mechanic tries to avoid it.  A crankshaft removal, cam removal, and IP housing and plate removal are just a few examples of jobs that will mean realigning the gears.  Smart mechanics hold the IP gear while taking the plate and housing off so they can mark the teeth with a paint pen, like the yellow lines in the image below. 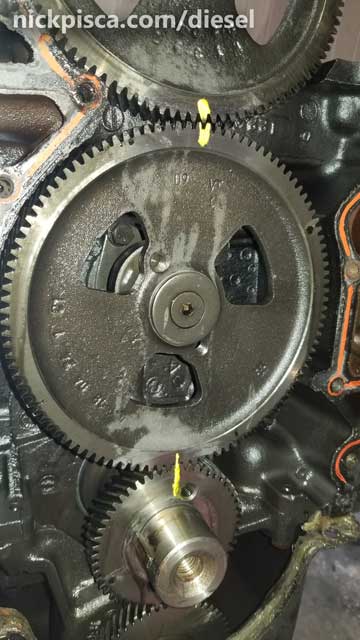 But let’s just assume that marking the gears are not possible.  Like the IP gear fell off the block when you were pulling the housing or plate, or like the crank swap I did in 2018.  Or you broke a tooth on the gear and had to order a new one.  Or you ordered a sweat R&D IDI Performance cam and had to swap over the gear.  Well first off, you have to remove the front plate to see what the hell is going on:

Here’s the grainy image from the Ford International Service Manual that kind of explains how to line them up:

So, to better express what the hell is going on, is the “O” – “O” marks on the Crank gear and the Cam gear should align, and the “Y” – “Y” marks on the Cam gear and IP gear should align.  The service manual talks a big game about some chamfers on the “Y” position, but I looked hard for this and didn’t see anything like that.  I assume the put that in the teeth so that it could be identified from looking down the front plate gap, but that isn’t the case at all.  If you put the front cover on the engine without properly marking the cam gear, you are SOL. 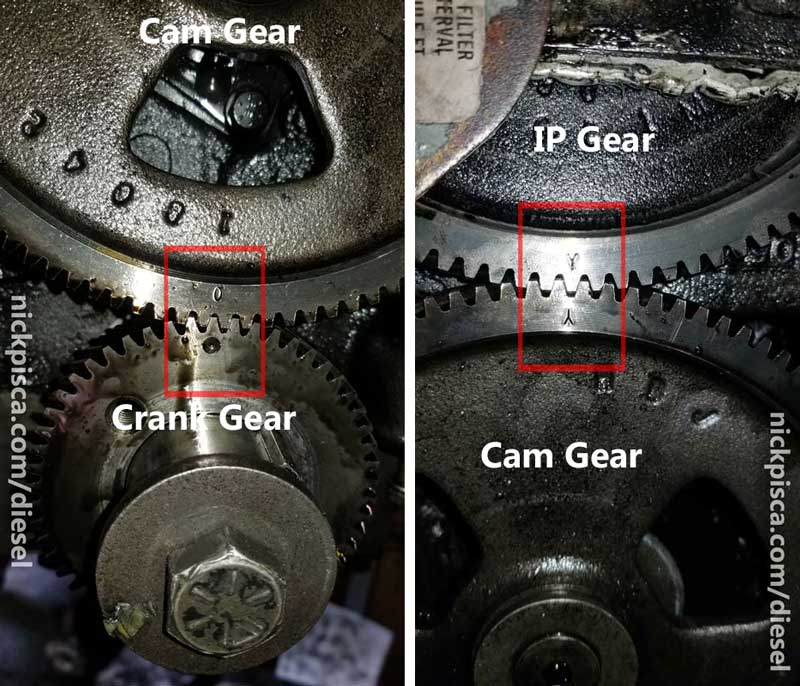 So, with the front cover off, aligning the “O”-“O” is pretty trivial.  However, precariously perching an IP gear on top of a cam gear and hoping it doesn’t fall over in the process of sealing the front plate cover is a bit sketchy to me.  I’d rather hedge my bets by marking the top of the cam gear with a paint pen, so that I can look down the block and make 100% sure that I have the exact right gear position. 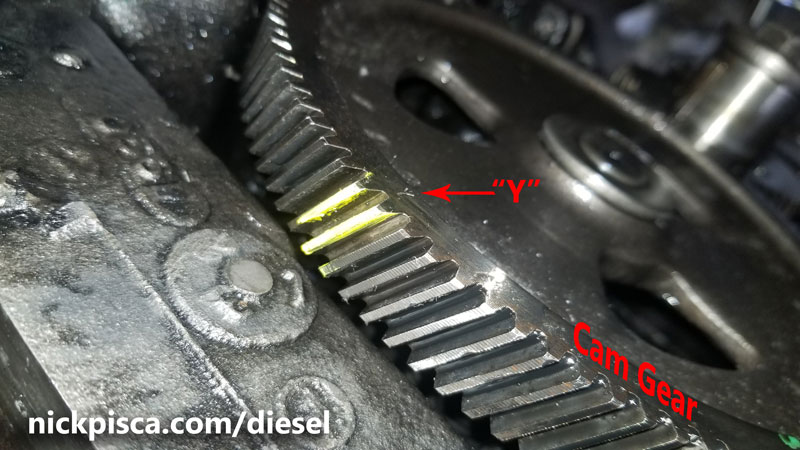 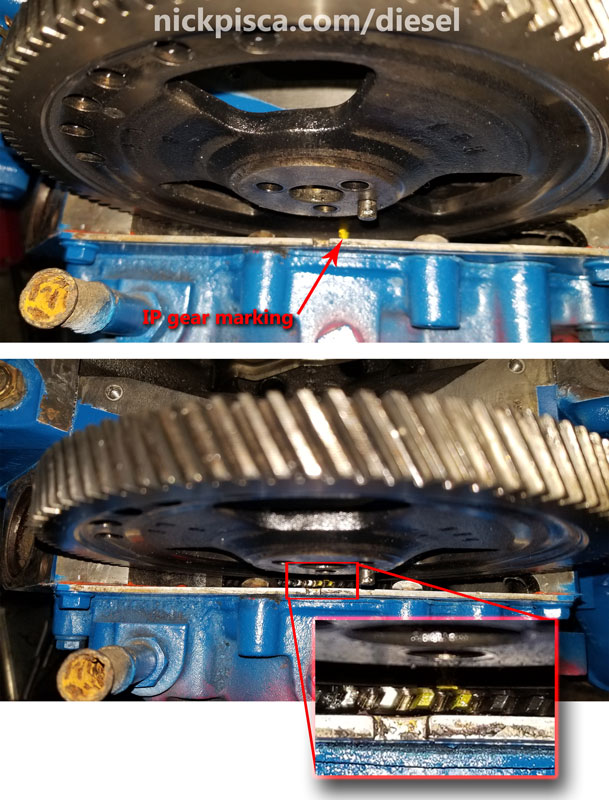 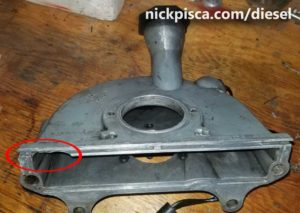 With the gear successfully aligned, then the IP gear housing can be reinstalled.  I carefully install that housing, because there is a tooth and slot that must line up perfectly, otherwise it can lead to damage to the IP Gear Housing, like in the image to the right.  The slot and the notch both have to properly sealed with Permatex and aligned prior to torquing it down.  The gear housing is aluminum, so it is less durable than the steel components.