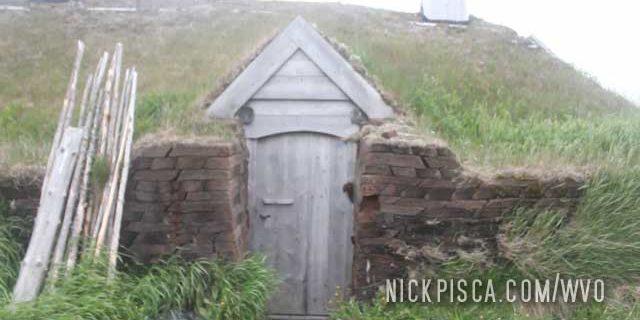 Wow! First time in Newfoundland! After we departed the St Barbe ferry, we headed north to the Lans Aux Meadows World Heritage Site.  We didn’t have a definitive plan.  We just wanted to get up as far north as possible and find a hotel in the area.  As we drove northbound, we saw more and more signs talking about Norse culture. 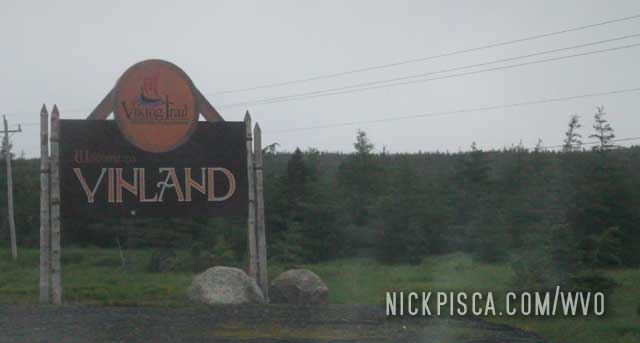 We didn’t realize just how big Newfoundland is. Not only that, the northern part is VERY remote.  There wasn’t much for hotels and motels up there.  After driving around some, we found a hamlet with a general store that discussed a family that rents out a cottage.  Considering this was the first time in a while we could catch some Z’s before the upcoming 1000-km drive to St Johns after visiting the world heritage site tomorrow, the moderately-priced cottage was not too big of a deal.

The cottage was nice and cozy, and it even had two bedrooms so I didn’t have to hear Glenn crap his pants all night.  That night, it got below freezing. We even brought the cans of soda into the cottage so that they wouldn’t freeze and explode in the vehicle.  I simply cannot believe that in the middle of July, it could be below 32 degrees in the day and evening. 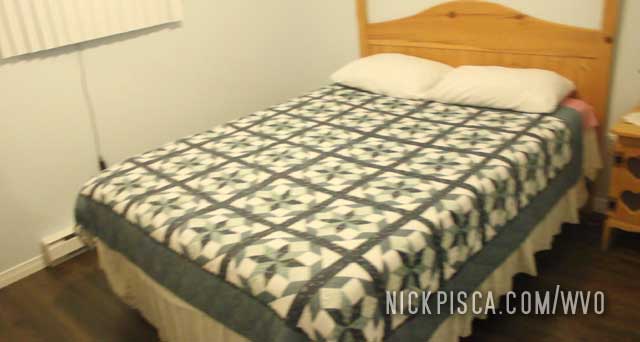 Before we went to bed, we found a small upscale restaurant on the tip of the peninsula.  It was called The Norseman, and we were severely underdressed.  The food was probably the nicest and elite stuff we had eaten in a decade.  Much better than the microwavable meals we usually eat on these trips.  We headed back to the cabin for the night.

After a good night’s rest, we came outside to check over the van.  It had been running for about 8 days straight, so it was overdue for a thorough lookover.  Upon inspecting the radiator, we had a catastrophic realization: the oil cooler repair we conducted in Wisconsin at the beginning of the trip did NOT work.  There was a substantial quantity of grey oil in the radiator.  We spent the majority of our morning trying to siphon out a lot of the oil out of the coolant.  Most of it was floating on the coolant, because oil floats on water, but that meant our whole coolant system had been compromised.  We had to decide what to do next: keep on going (carefully), or abort the mission.  Since we are basically at the halfway point of the entire 2015 WVO roadtrip, it seemed foolish to abort now.  In a way, the halfway point is already the de facto abort point, so we elected to keep on going, and make a procedure to pump out the oil as it accumulates in the coolant over the next few days. 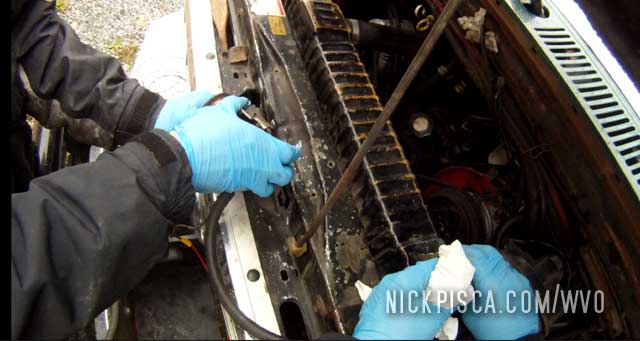 We got to the Lans Aux Meadows site and it’s a truly impressive place.  I think this was the first World Heritage Site I had ever visited, and it’s on par with the best of the best national parks facilities.  It was FREEZING out, in the low 30’s and with gusts of 30-40mph.  I wore literally all the clothes and jackets I packed, because I was not expecting wintery conditions.

As we entered the Lans Aux Meadows visitors centers, there was a bunch of rangers and tourists on the inside.  As we struggled to open and close the front door against the gusts of rainy and snowy wind, we got inside to declare, “We should come back here in the summer when it’s warm.”  The rangers and tourists got a good laugh out of our joke. 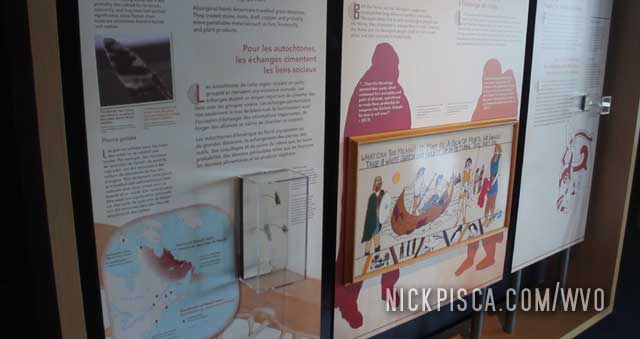 The visitors museums has all sorts of multimedia displays and actual artifacts from the Vikings that lived here in the middle ages.  It was an impressive museum.

The site has a series of trails for tourists to explore the grounds.  The site is situated directly on the Atlantic coast. 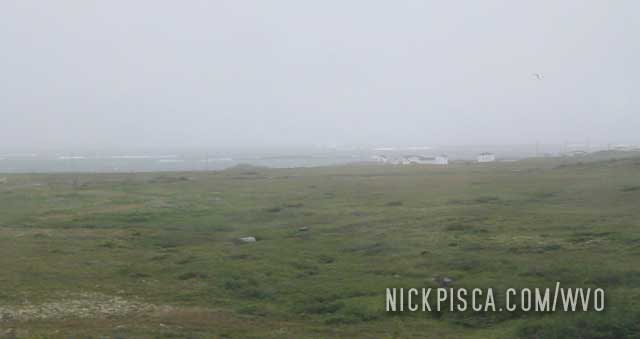 There are little creeks and streams all over the place.  There are not a lot of trees.  It’s kind of like permafrost or tundra-like terrain, yet the soil didn’t seem too solid.  Maybe the growing season is just so small, that trees don’t fair well in this climate. 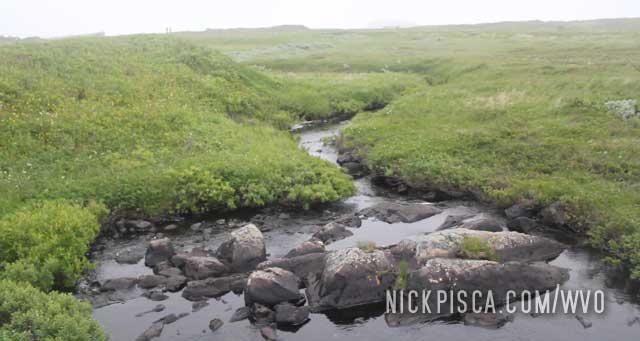 The Vikings that settled here built sod houses in lieu of timbers.  They apparently went down to places like Maine because they found wood artifacts on this site that couldn’t have possibly been obtained in eastern and northern Canada or Europe.  No known Viking site had been found in that area, yet. 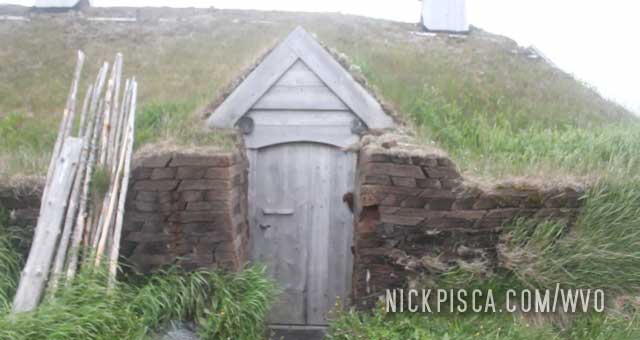 In addition to the Heritage Site and its museum, there are also reinactors that interact with the tourists to show the life and times of the typical Norseman.  It was cozy and warm in these sod houses near the fire, especially after the long tour of the grounds by the Heritage Site Tour Guide. 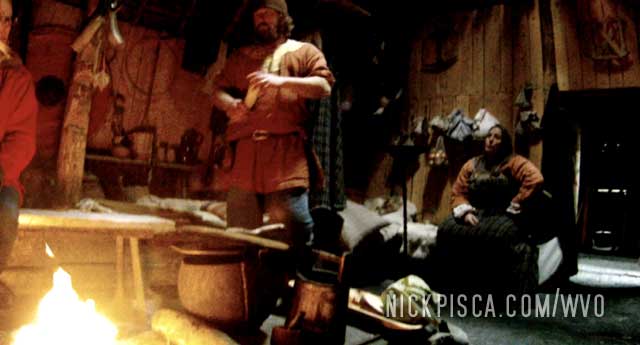 The major thing that piqued my interest was a comment by one of these actors.  They said the records show one of Liev Eriksons decedents eventually lead a Viking evacuation of the New World.  He had a scuffle with the native population, that led to deaths on both sides.  The Indians lead a revolt against the Norsemen, and forced them to egress Newfoundland.  When they got back to Scandinavia, they told the Old World not to bother going back, because the native population was such an intimidating military power.  That is an astonishing statement, because this was the heyday of Viking supremacy, and if the greatest fighting and pillaging force of that era was afraid of the Newfoundland tribes, that was a testament to the strength and resilience of their tribe.

Hardy har har.  Someone on the ferry to St Barbe said that all the locals love to eat this crap…

We got on the ferry in Blanc Sablon, and headed out to sea....  Arg! There were whales and dolphins swimming…

We decided to drive through the night from the New River Gorge Bridge to central Kentucky.  It was already getting…