After battling this pesky oil-in-coolant problem, I finally broke down and opted to install my spare 6.9 in my E250. I exhausted every possible oil contamination situation:

There is no way I got three bad oil coolers in a row, or a bad set of heads. The only thing left was a small crack in the block, that is so small that when the engine heats up, it allows the higher pressure oil seep into coolant but not allow the water to return to the crankcase.

So the block had to go.

I had been preparing and commenting recently during the swap on this thread, but I wanted to toss the pictures up on the forum. We were working fast over 6 days, so there wasn’t a lot of time to post pictures then.

About 18 months back, I stumbled upon a sweet deal for a turbo’ed 6.9 in a 1984 IDI van. The PO had some power problems at higher RPM’s, and he was moving out of state, so he sold it to me for a great price. Couldn’t say no. I figured his power problem was the cobbed-up rats nest of fuel filters and diesel pumps that obviously had some air intrusion. He was a gasser idiot, so owning a diesel was way over his intelligence level.

I really only wanted the van for parts, so I extracted the engine, turbo kit, electrical, gauges, suspension, panels, axle, and various other stuff. Tried to sell the body and frame, but no one wanted it, so I sold it for scrap. The 6.9 just sat on a stand in the garage just in case I my 7.3 ever had a catastrophic problem.

I’m sick of emulsifying my coolant to get rid of the grey goo infesting my coolant system. My friend flew out to help me wrench on this van cuz I can’t trust anyone in Los Angeles to do anything right. We only had 6 days to swap the engines and do any other work we needed.

Back when I extracted the 6.9, I just dumped it on a stand and let it sit for a year. It needed a little TLC.

We stripped off the banks turbo kit and other components. 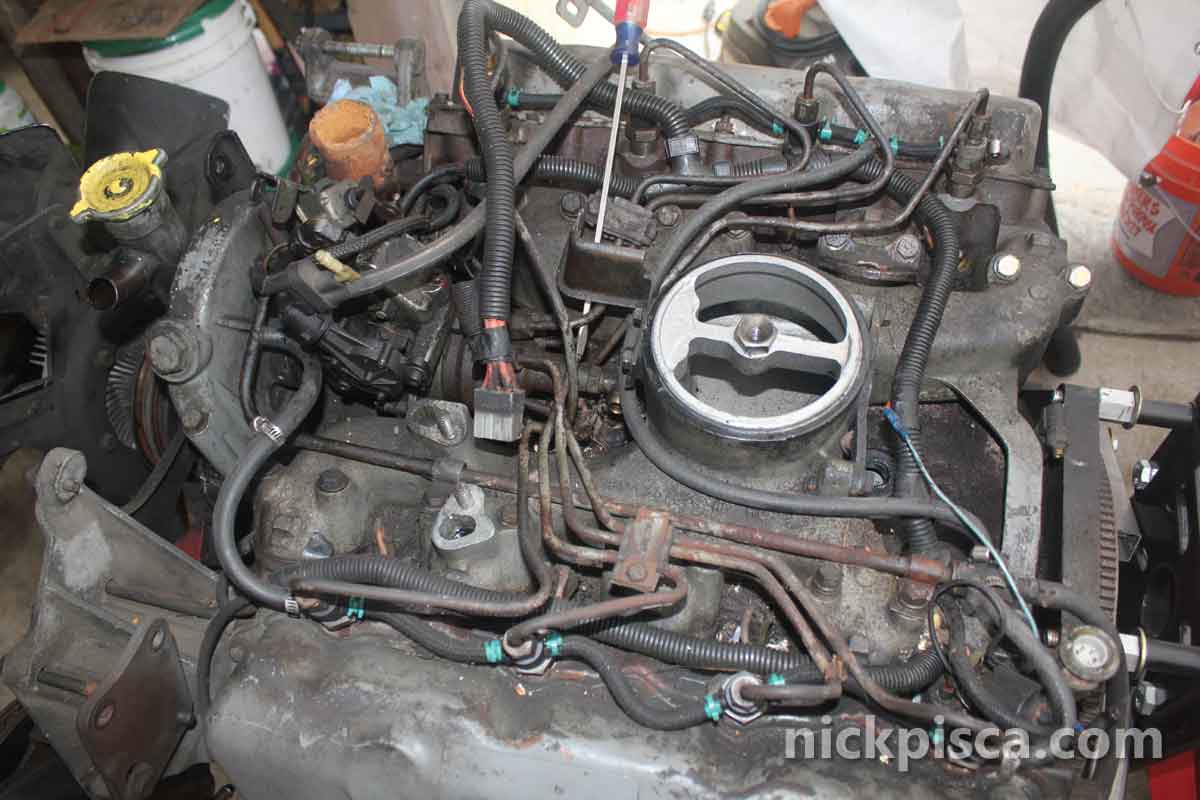 We pulled the IP, injector lines, and injectors. When I pulled the 6.9 last time, I jacked the body up off the frame 2 inches so that the oil pan would clear the crossmember with the injector lines and IP still installed. But with our short time frame, I didn’t have the luxury of jacking the body on this other van to get that extra clearance. So the IP and lines had to be pulled off on the 6.9. 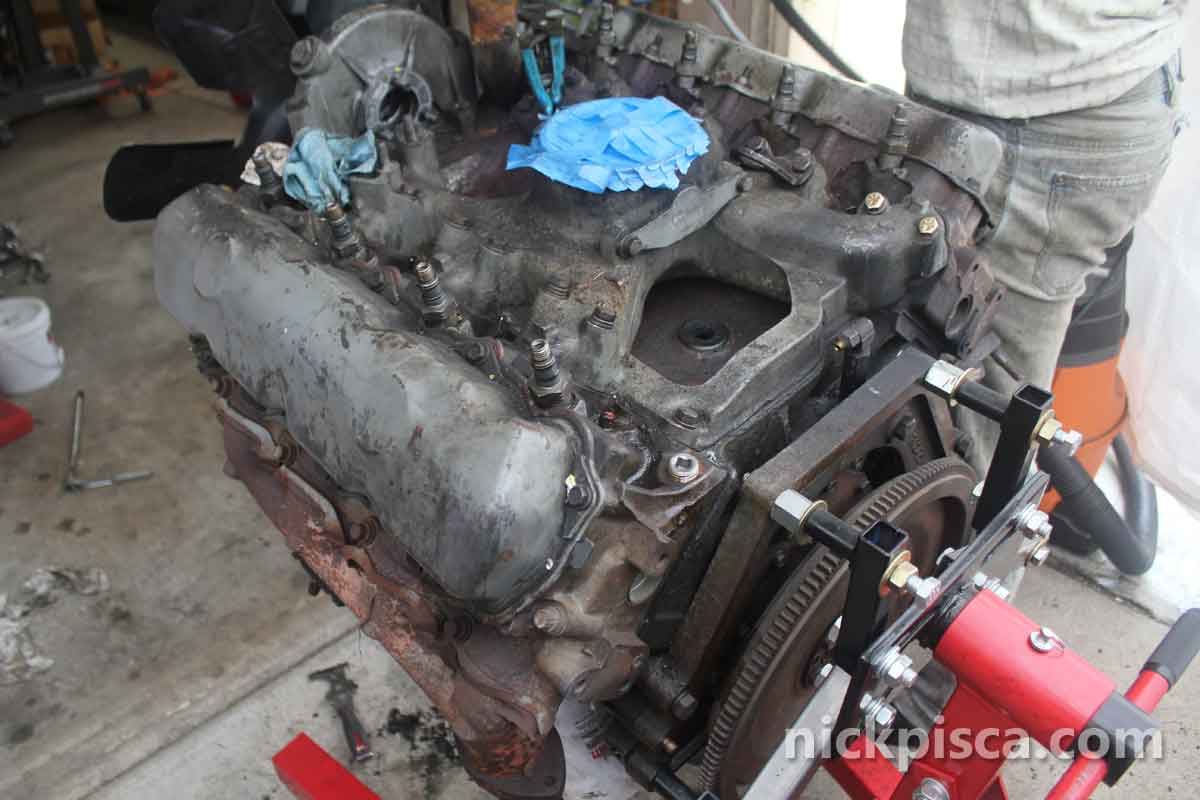 We cleaned up the block kinda quick just to make it easier to find leaks. We ain’t going for car show quality here. Just trying to get this in asap. The PO had used household wall insulation to try and keep the doghouse clean, so there was lots of fiberglass and dust everywhere on the top. A couple mouse skeletons and a dead snail was sucked up by my shop vac. 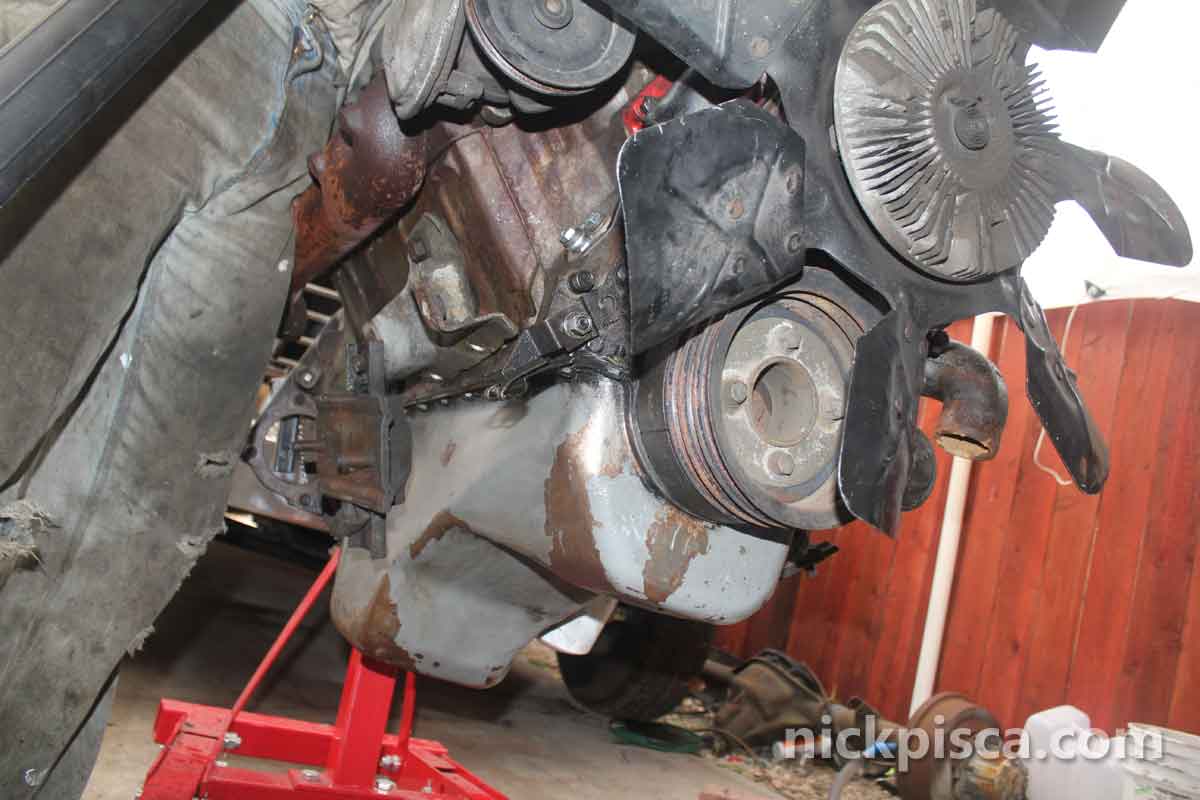 I removed the lift pump a few weeks ago, and installed a block off plate. I’m running a duralift E-pump with the R&D Stage 1 dual fuel filters on the rail so no need for that crap.

I have a chrome Warn winch bumper with a cattle guard from an 80’s Ranger that needed to be pulled. Then we began taking the front parts off the Clubwagon, like the tranny cooler, condenser, radiator, grill, supports, and other cross members. Also the cruise control and fog lights had to be moved. 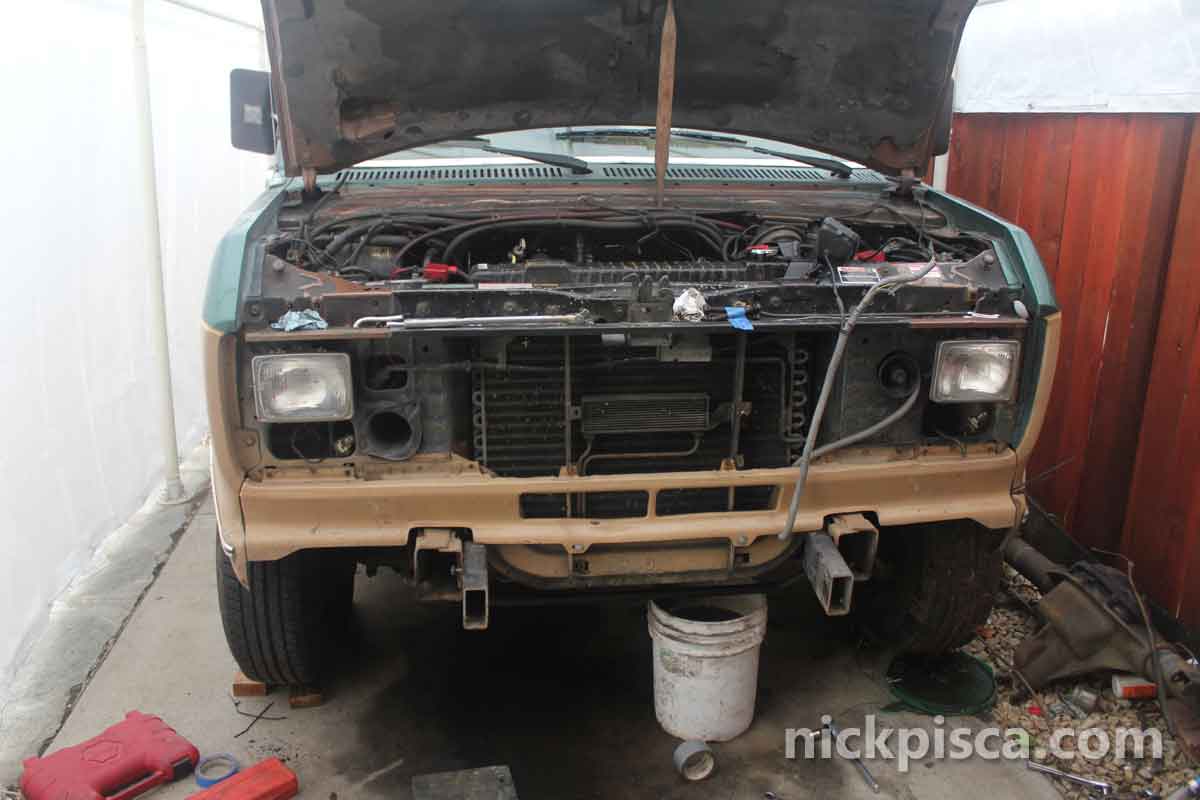 One last look at the 7.3 with the Hypermax kit. Bummer it’ll have to be pulled, after all the work I put into it over the last 3 years. 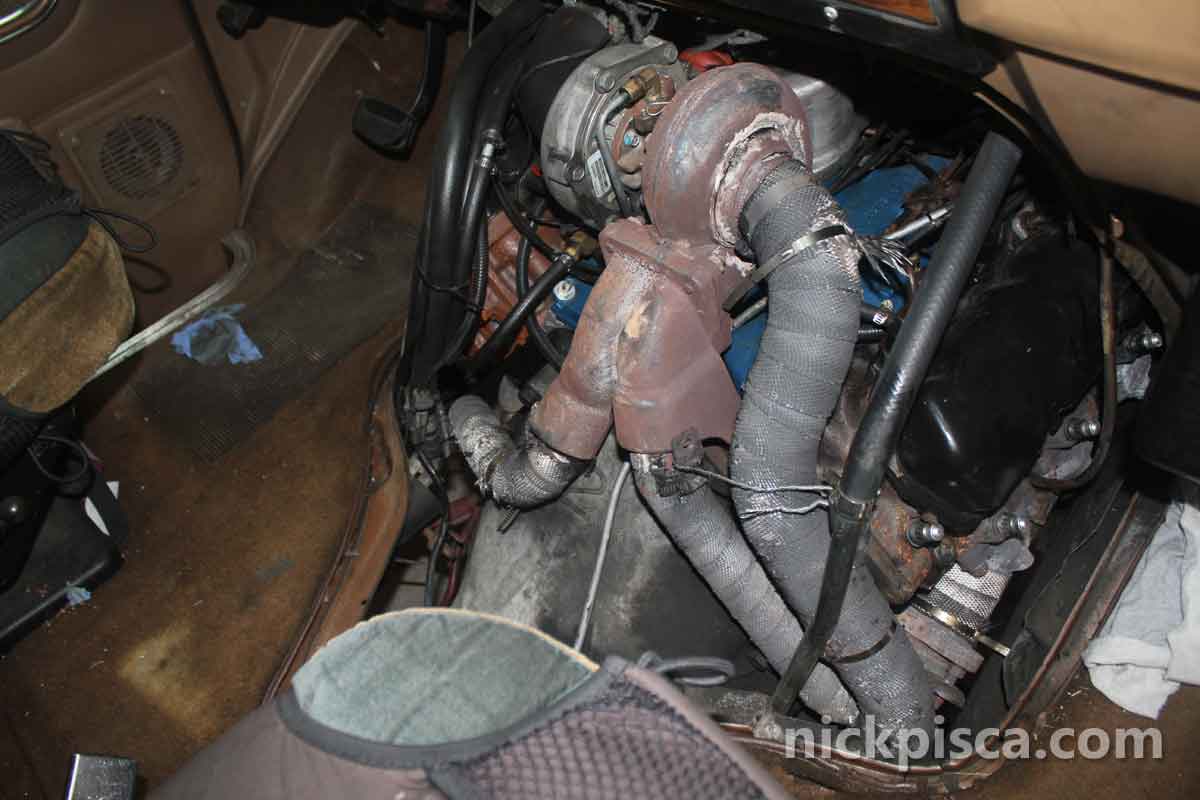 Thanks Ford engineers. {sarcasm}. It would have made sense for them to have the AC lines flexible on one side of the condensor, so we could have just moved it to the side, but instead, it’s on both sides. So, we had to vacate the 134a to get the condenser out of the way. 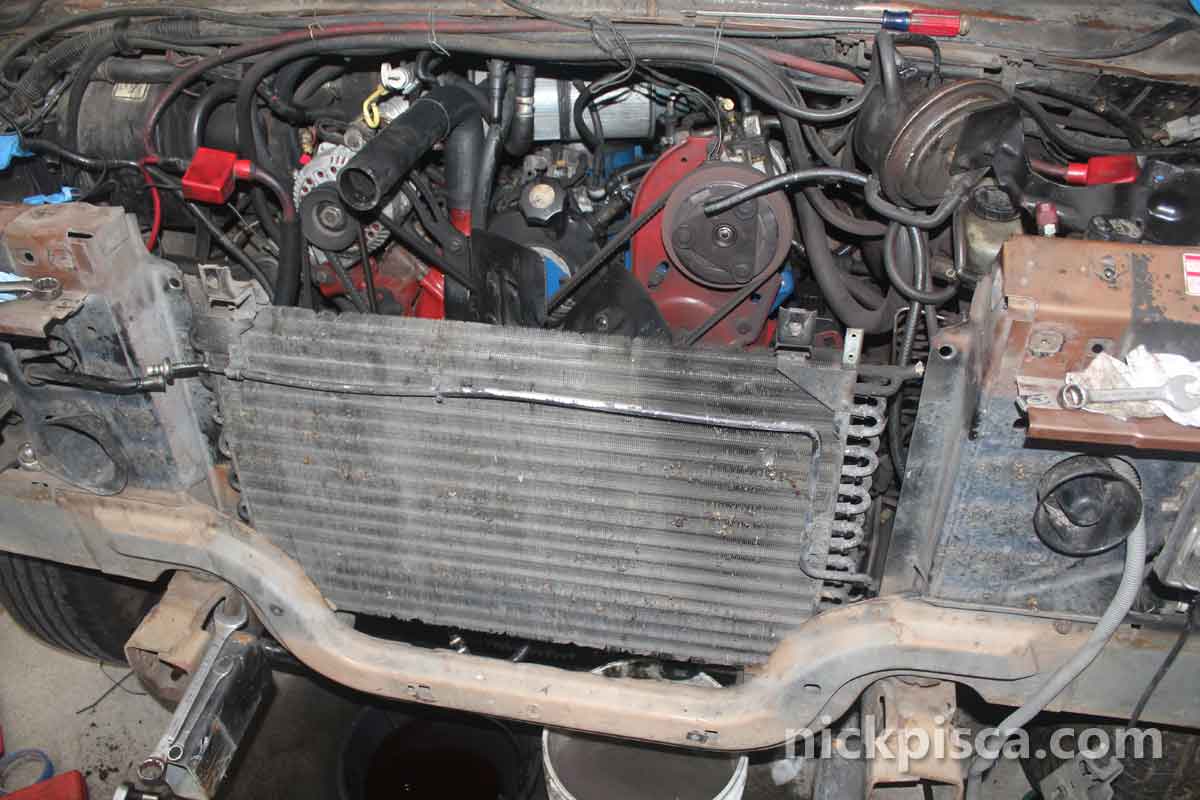 Pulled the AC pump and alternator. Also, we pulled the passenger side battery. Believe it or not, but the 7.3 is so tight in this engine bay, that the battery cable retention band on the passenger side will literally obstruct the engine from being pulled. So that had to be removed. (Before we pulled the IP, we turned the motor so that we could gain access to the torque converter bolts. Undid the tranny mounts and crossmember, and we released tranny from the block, and pulled it back about 5 inches from the flywheel. 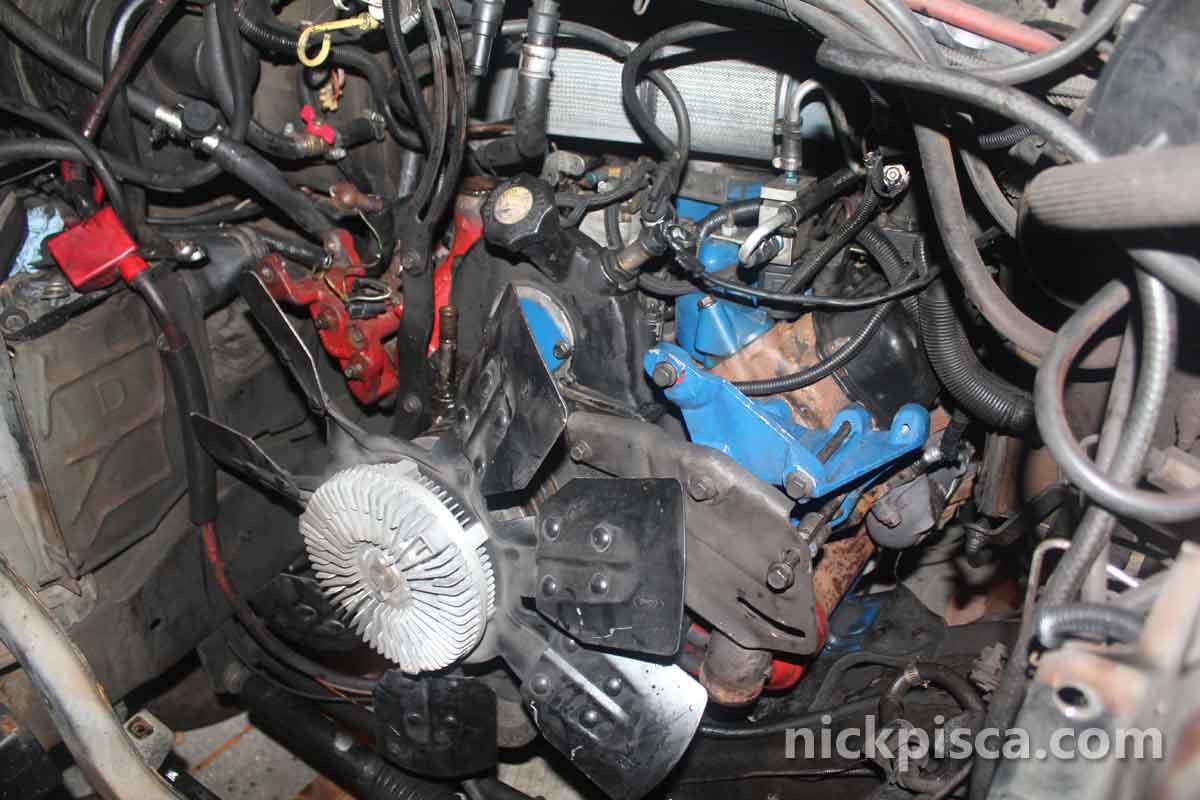 Eventually, we extracted the PS pump, turbo kit, injectors, injector lines, IP, and other stuff. Since I’m planning on running the 7.3 wiring harness and GP’s, I kept the bundle off to the side of the block. We disconnected the engine grounds and starter. Also we pulled the oil filter, because it will not clear the crossmember with the oil filter installed.

Now we are finally able to start pulling the engine. 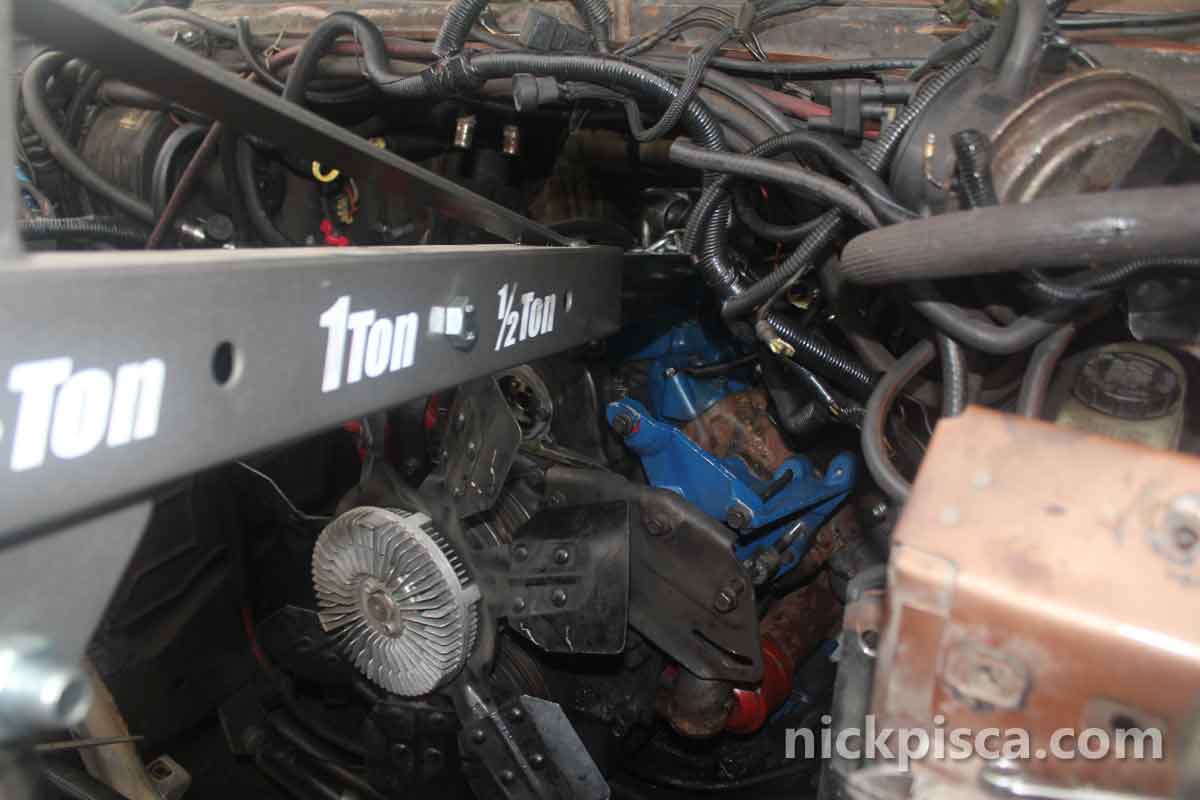 Since there is almost no room for error or tolerances, i had to fab up a custom engine crane mount. It allows the chain to ride over the top of the crane, rather than dangle underneath. This has some pluses and minuses. Pro…it gains me a few inches that I desperately need. Con…you gotta watch the underside of the boom like a hawk, because if you jack the engine up too high, you can crush the top of the gear housing or other components that might conflict with the crane. 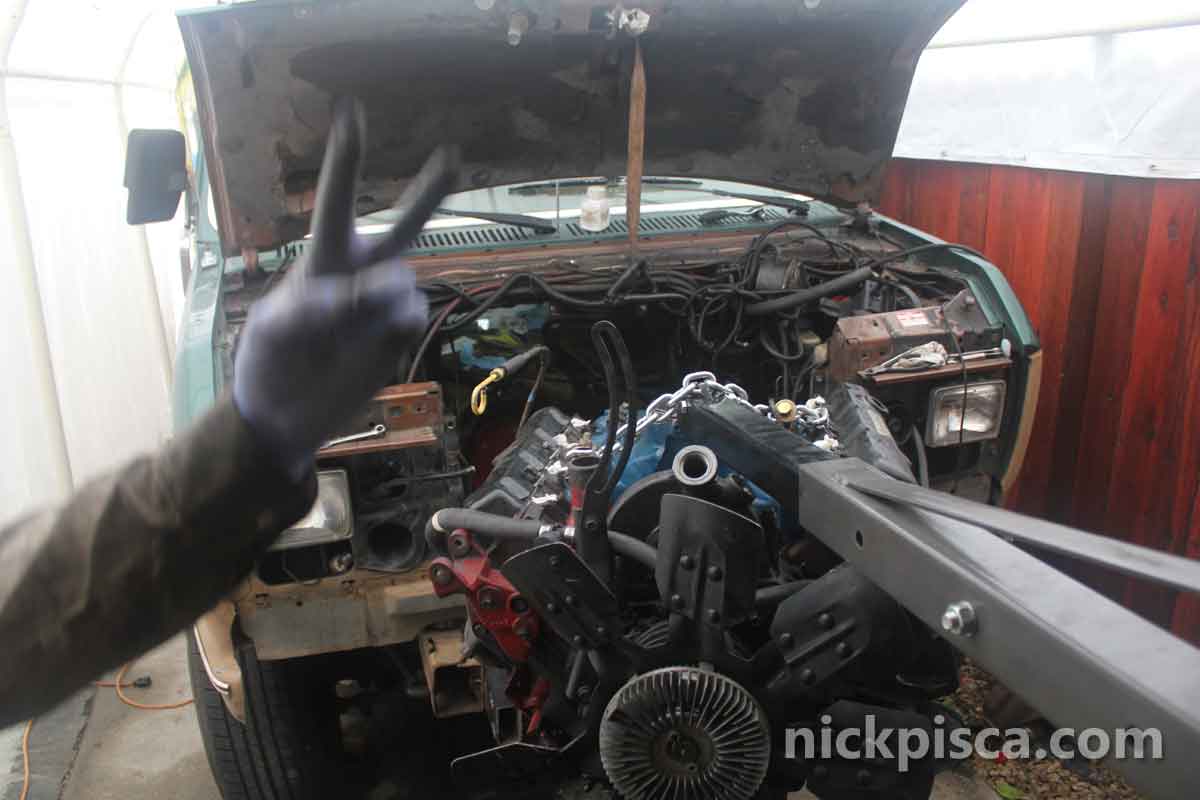 Getting the engine out was not fun. We ended up dinging up the passenger side valve cover a LOT. If you haven’t pulled an IDI from a van, it is EXTREMELY tight. The backs of the valve covers are smooshing on the narrowing gap of the doghouse, while the oil pan is grazing the top of the crossmember, while the intake is obstructed by the front/rear heater core metal lines along the underside of the engine bay, while the fan clutch is hitting the front body crossmember. You are trapped from all sides. 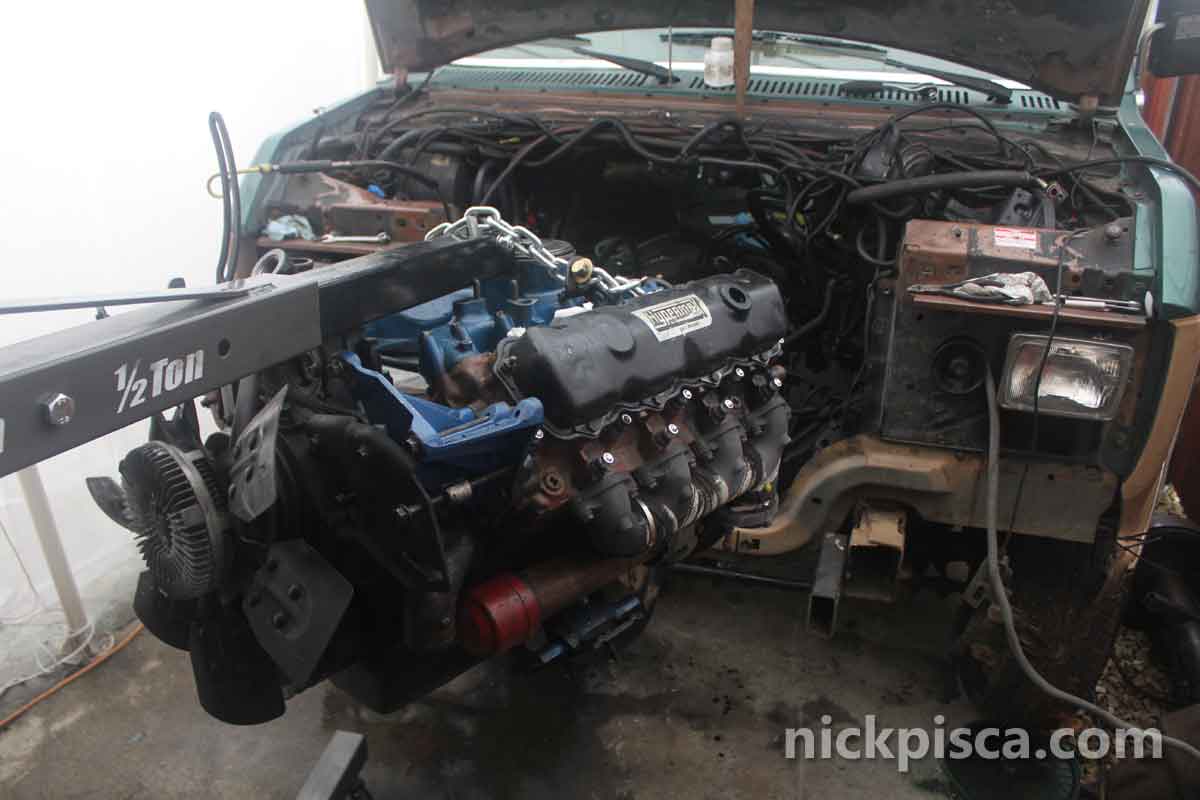 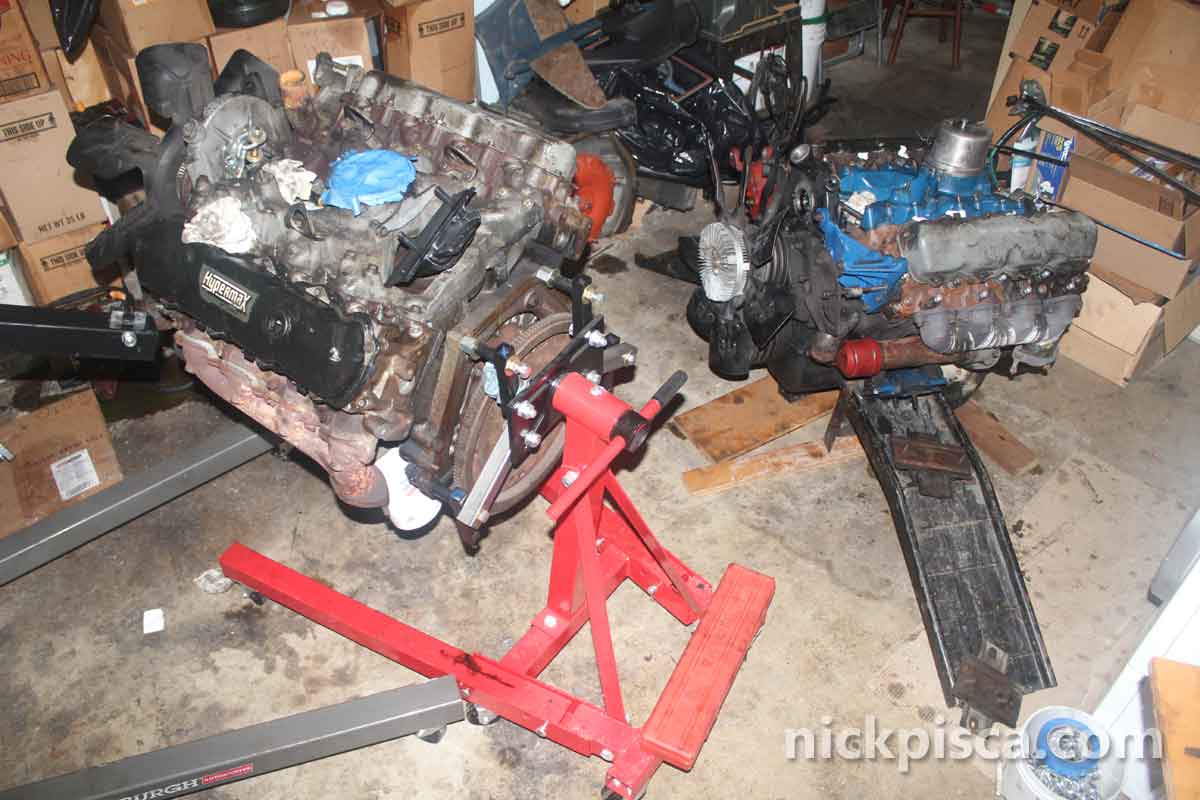 Since the Banks and Hypermax kits have different CDR setups, we had to transfer over the Hypermax Valve Cover which has the breather. The Banks had it on the gear housing cover oil fill. Not a fan of the alternating color VC’s, but whatev. Not a priority right now. Also, the oil feed lines are different between Hypermax and Banks. So the oil pressure and supply ports are swapped. We tossed in the 1988 GP’s and stuffed the injector holes, and got it ready to reinstall. 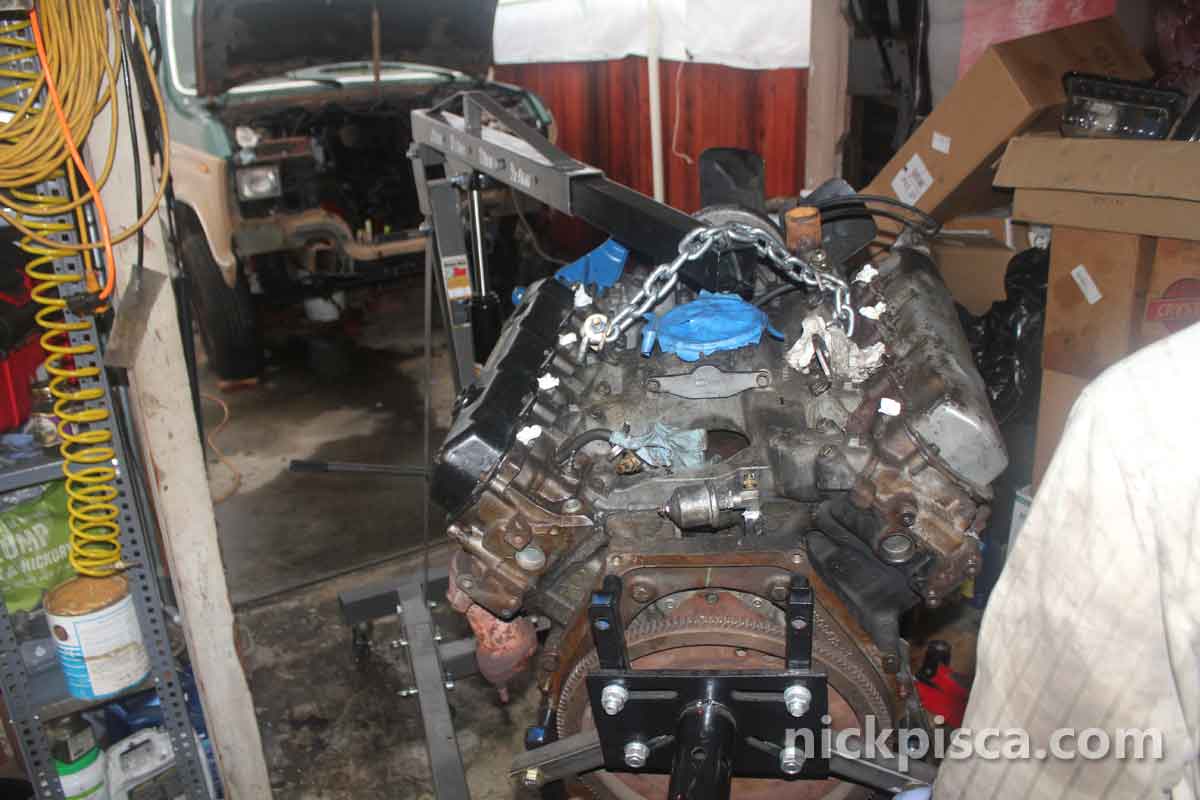 Oddly, the reinstallation of the engine wasn’t too bad. I bought a set of Anchor motor mounts (Rock Auto F’ed up one and I had to make an emergency part run to Autozoo for a replacement) and we began tossed it in. Probably only took an hour to set it on the mounts. We lined up the tranny and torque converter with really long Grade 8 bolts. Handy trick with those long bolts. We just kind of improvised that on the spot, and it allowed us to line up the TC without any issue. 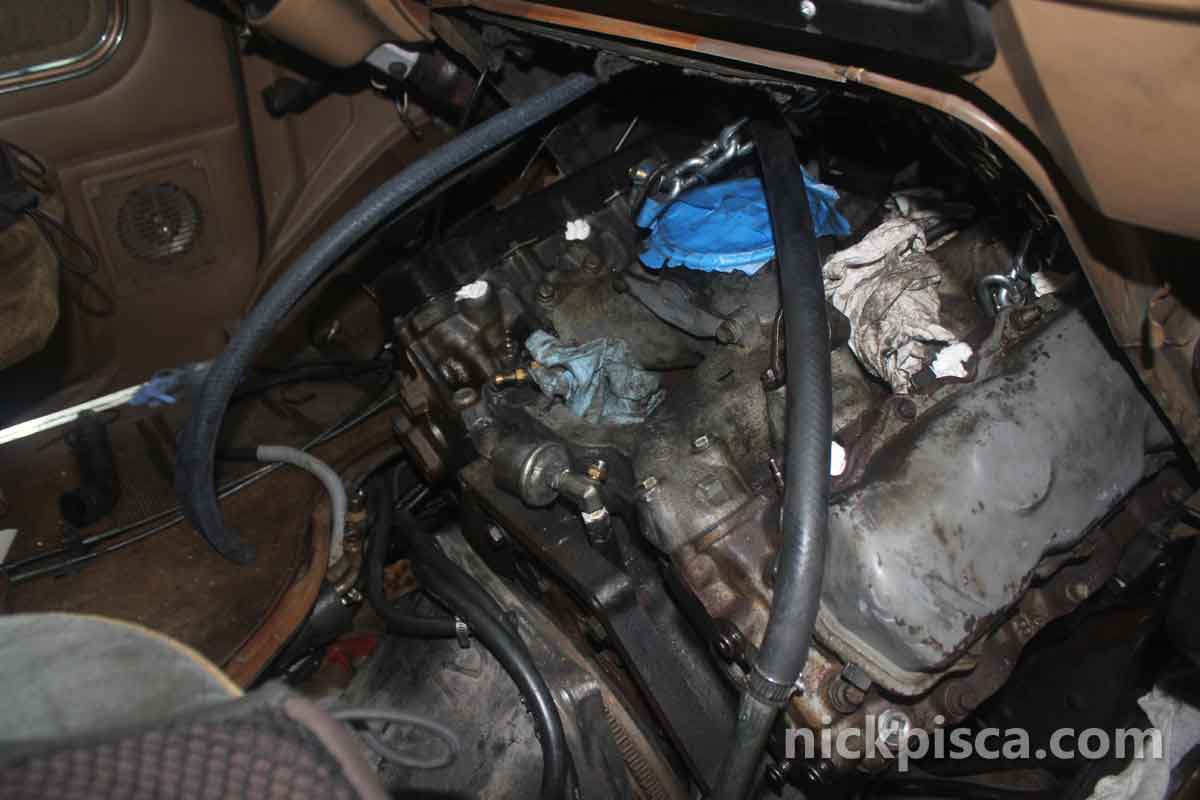 The grade 8 bolts are not pictured here. I was too busy managing the tranny from underneath while my friend lined it up from above. Once it was all firmly connected, we were able to begin the reinstallation of all major parts: 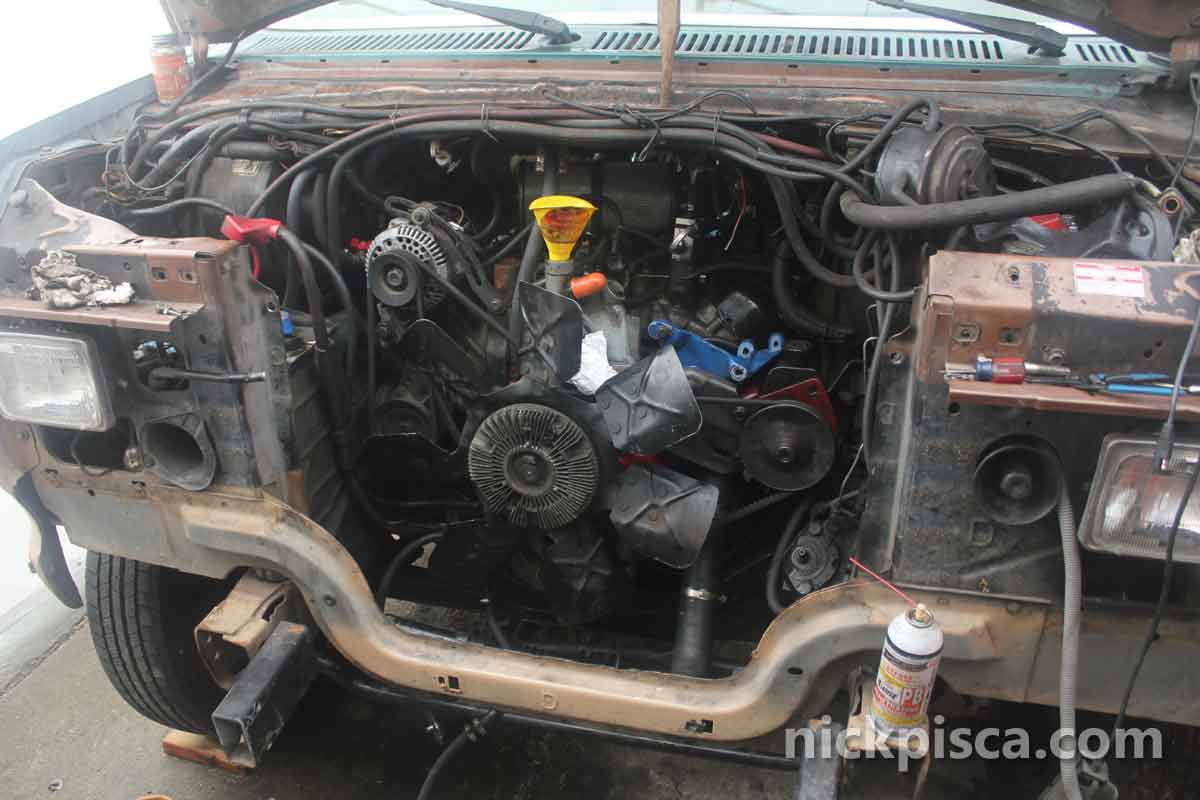 We tossed in the radiator and the top- and bottom-hoses and closed the loops on the heater core outlets as well as the tranny lines. Didn’t matter right now to plumb those to the actual heater cores and coolers. we are just making sure it’ll start. I used my spiffy brass diesel schrader valve/temp probe that I designed a while back to purge the air out of the fuel lines.

Firing up the New Engine

Unbelievably, we cranked it three times. Purged the air out of the injector lines, and voila, it fired right up. Crazy huh? I have a video of the moment, but I don’t know how to add it just yet.

But our elation was short lived. It was obvious that water pump was f’ed. It was wobbling worse and worse with every minute. We promptly shut it down, and begun sourcing a new waterpump. NAPA had one in stock {luckily}. 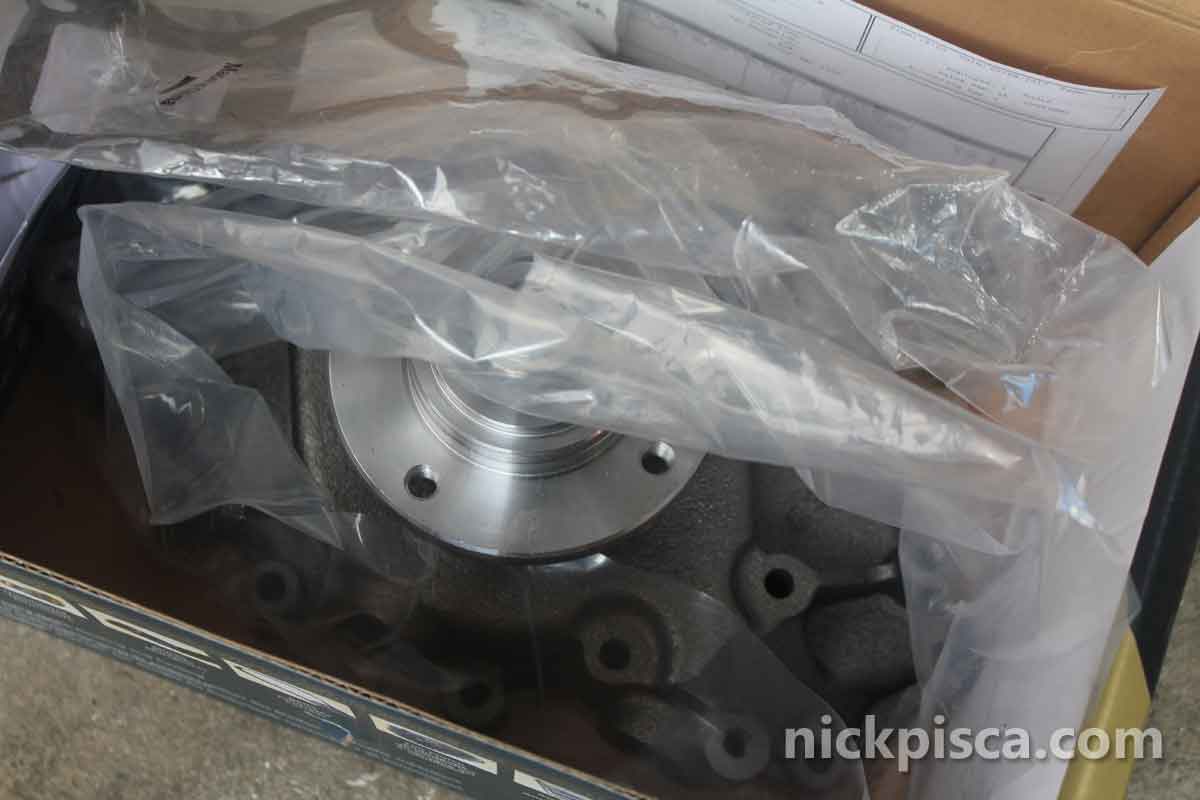 So we had to drain the coolant, remove the radiator, remove the fan clutch, and move all the PS/Alt/Vac accessories AGAIN. Yippie. 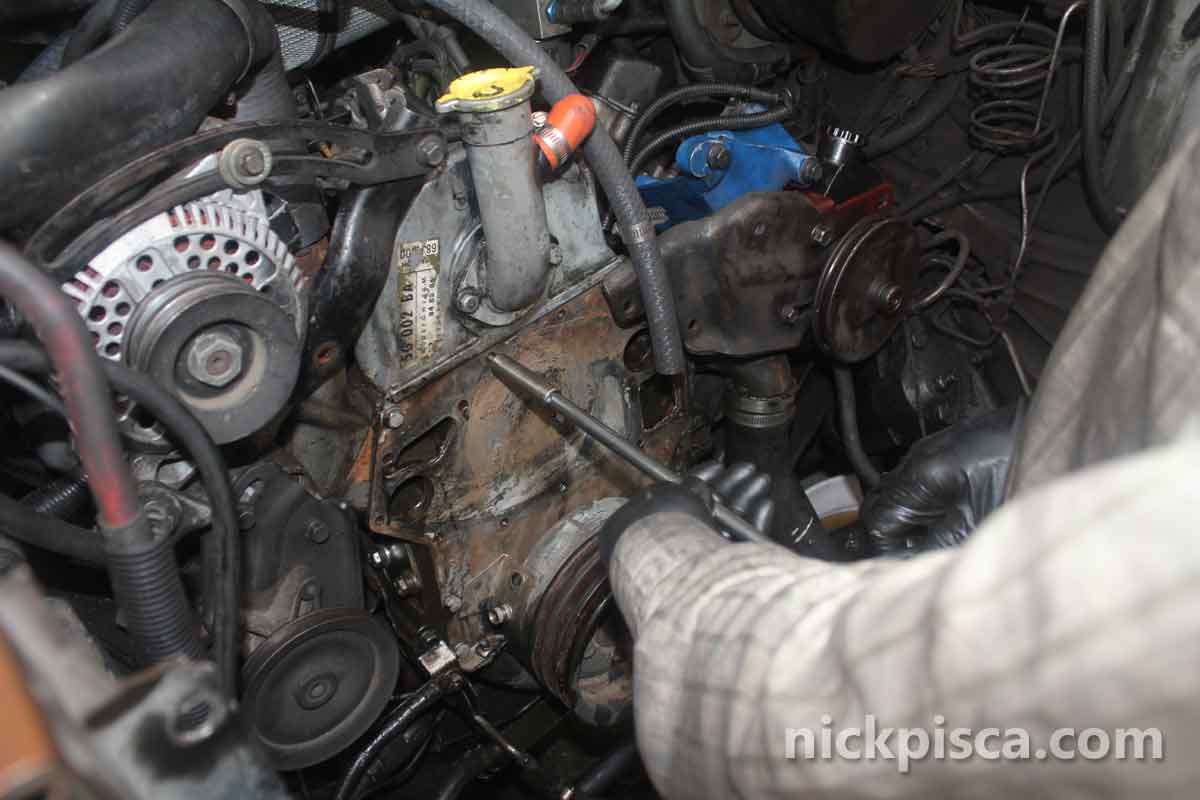 We chased all the threads and cleaned up the block face quickly. After doing all the engine pulling, this waterpump jobber was kind of child’s play. In the process, we found some mistakes by the PO that they didn’t use the right washers on the WP pulley, so we fixed that too. And I transferred over my 7.3 fan and fan clutch, cuz mine were much newer and better than the 6.9’s version. 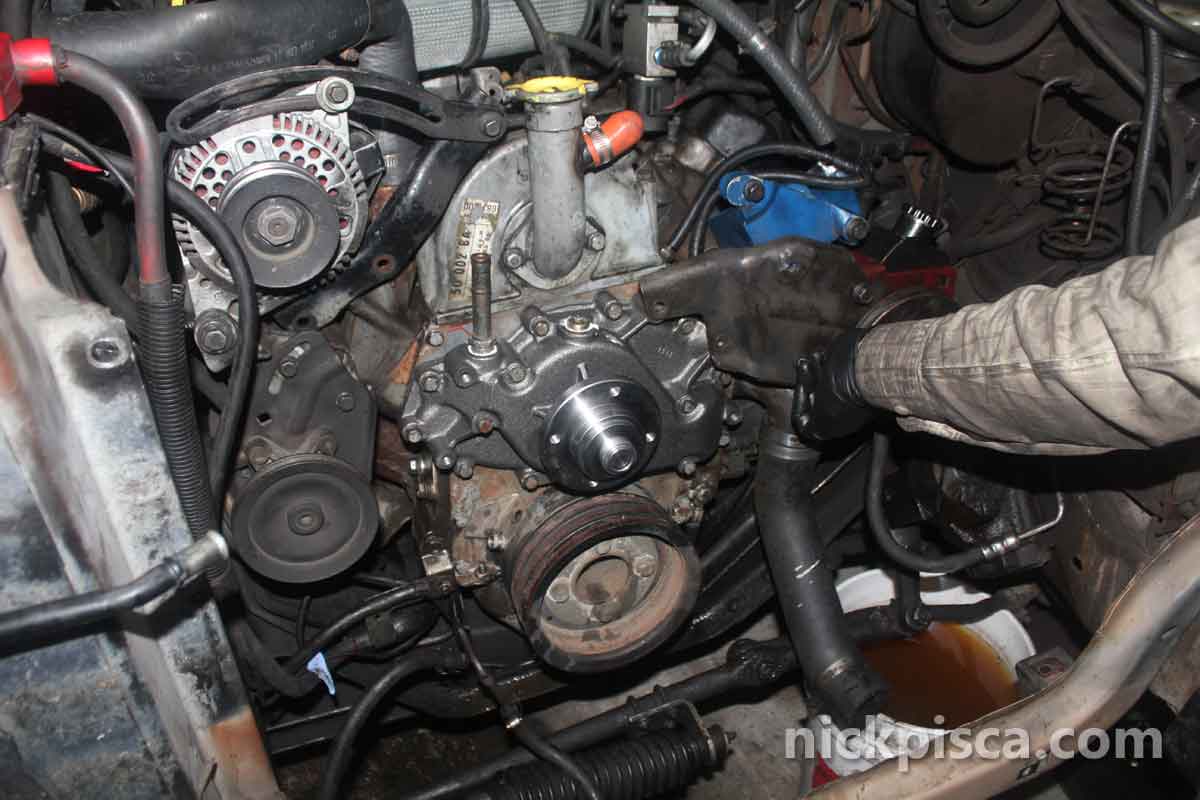 We reinstalled all the accessories again and tossed in the radiator. Refilled the coolant circuit and fired it up. Ran nice. I used my new timing gun and Ferret meter (expensive yes, but no more borrowing anymore.

On the picture below, you might see an orange condom on the oil fill. That’s a stopper for the tube from the Banks Turbo CDR breather hose that I rigged up from McMaster Carr. It’s supposed to be rated for 575 degrees. We’ll see how resilient it is. I didn’t want to use this Banks fill hose, but transferring over my 7.3 gear housing meant f’ing with the IP gear, so I left it as is for now. No need in adding more variables in the system at this point. 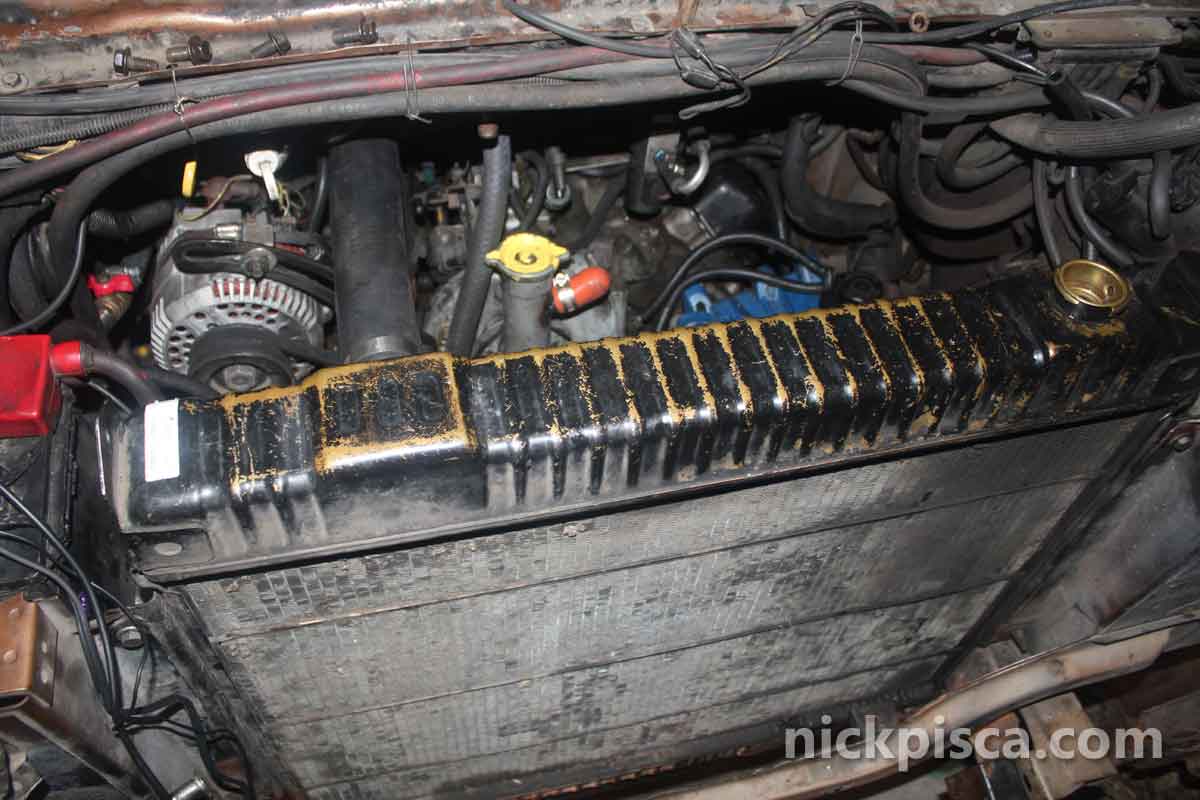 Reinstalled the tranny cooler, the winch bumper, the grill, the crossmembers, etc. Lined up the hood latch and rewired the fog lights to have quick release electrical (because it was a pain to get the lights thru the cattle guard and bumper), so now that’s not a problem. 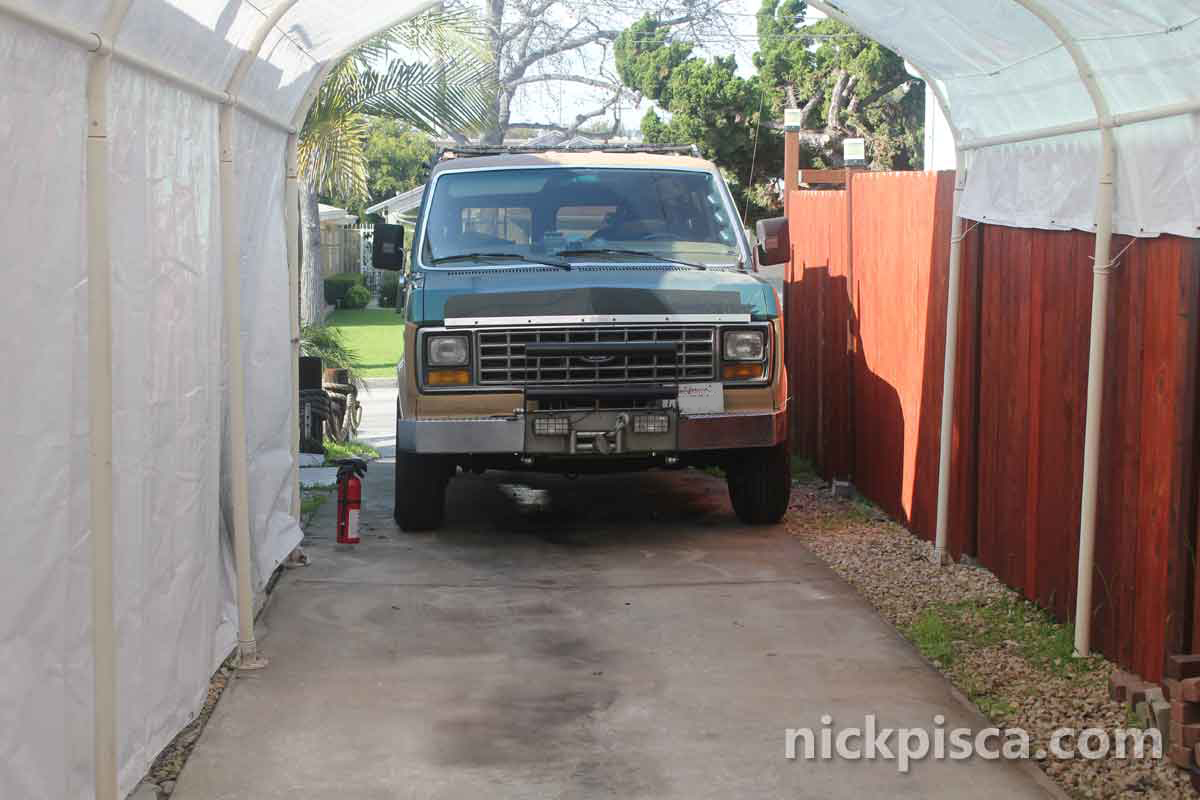 Done for now. I’ve been running if for about a hundred miles. The engine blows some decent black smoke under load. So I turned the fuel down a flat. That helped, but it’s still pretty black. I had this IP on my 7.3, so maybe the displacement could handle the increased fuel supply on other engine, while the 6.9 needs less. IDK. Also, it blows slight white smoke when the van is stopped and idling, but if the engine is idling in Park, it burns clear. This has been addressed by Macrobb and it’s timing related. I’m going to continue to adjust the timing over the next few weeks (once my kingpins are honed) and I’ll report my timing adjustments here. Justin at R&D coached me a while back when we were working to get my Hypermax turbo spooling, so I’ll do the same method on the 6.9.