Gearvendor Controller Broke? How I Replaced my Controller with a Simple Circuit

Gearvender Overdrives are a great addition to the rock-solid C6 transmission on these 1980’s Fords.  It helps bring the RPM’s down, helps elongate the life of the engine and transmission, improves MPG, and all that jazz. I’ve written a lot about my GVOD, including advice on how to shop for a used one, how to install a Maximum Overdrive-brand Deep Sump, how to access the internal filter, and its impact on improving fuel economy.

The only downside to adding a used GVOD is access to replacement parts.  Buying parts from Gearvendor HQ is an option, but they ain’t cheap.  And for the average 80’s truck/van owner, they are not driving these things for the nostalgia.  So I’m always looking for alternatives to the old parts, whenever possible.

The Tailshaft Housing is the blue part in this image. It is required for installation of a Gearvender Overdrive Unit.

The other item that is difficult to find is the Gearvendor electronic controller.  Well, I should amend my statement; the controller is easy to obtain, but will it work?  Usually not.  The electronics on these things are thirty years old; it doesn’t take much for a capacitor or resistor to fail, rendering the unit dysfunctional.  My controller arrived from the junkyard working ok, but after a few months, it started randomly shutting down and starting up.  It was a pain, because on the highway, the last thing I wanted was a surging overdrive.

I took my controller to a local electronics shop, and they quoted me a few hundred dollars to investigate the device and solder in whatever component failed.  And even then, if they replace that one electrical whatchamabobber, there was no guarantee that the other whatchamabobbers would fail shortly after.  I even asked them to reconstruct the existing controller with all new components, but the quote was so high, I contemplated learning how to build electrical circuit boards myself.

I’ve mentioned my simple-circuit replacement on several IDI forums, and have been asked about it on occasion.  Recently, I received a question from FTE user Jake_TheGreat regarding how I wired up my Gearvendor Overdrive (GVOD).  I thought this would be a great opportunity to publish our conversation, so others could benefit this information.

I’d like to thank Jake for his great questions and letting me publish our interchange here for others to peruse.  I’ll summarize my major points in a list below. 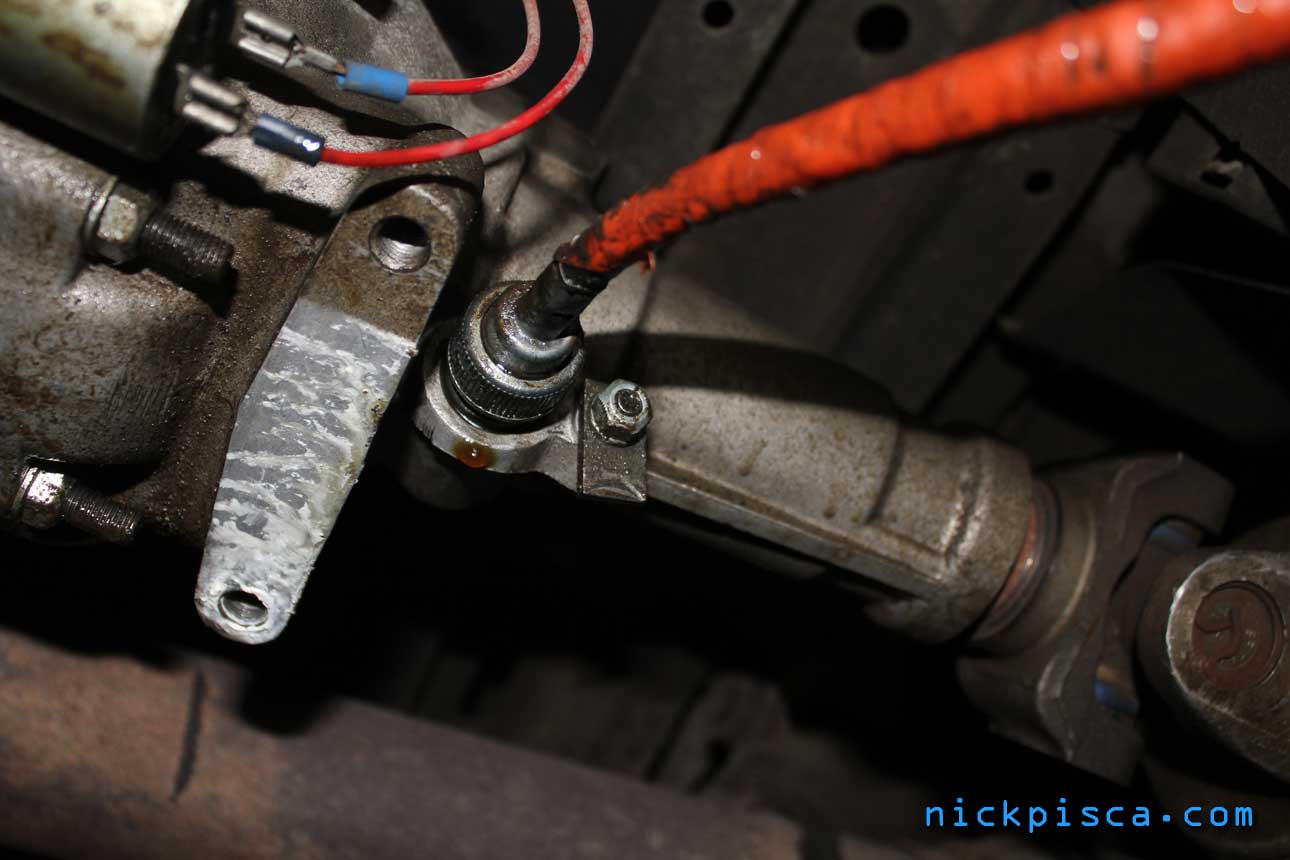 The 2 spade connectors on the Gearvendor Solenoid are in the upper left of the image.

To briefly recap, these are crucial factors when using and modifying the Gearvendor system, and any deviation from this will lead to severe damage to the overdrive, engine, transmission, vehicle, and possibly the occupants and nearby bystanders.  Have your vehicle maintained by a professional if this seems too difficult for you.  You don’t want to accidentally run over a person by leaving the GVOD powered on when you walk away from your parked truck.

One of my long term goals is to run a small tablet with a raspberry pi or PC Controls receiver allowing me to retrieve sensor information from all over my van, and render it on a custom display.  This would allow me to eliminate a lot of the disparate gauges scattered all over my dash, and showcase my vitals on the screen.  It could do things like display my speed, engine temp, tranny temp, intake temp, overdrive temp, boost levels, EGT’s, IP inlet temp, biofuel temp, biofuel capacity, fuel pressure, and all sorts of values.

I could also use this tablet to automate some of the little things on this non-computerized IDI van.  Like for example, I could have it automatically switch on a relay to turn on the GVOD at a predetermined speed, like 45mph.  And when I dip below 40mph, it can turn off the OD.  Could be a fun project.  I would have started working on this already if I hadn’t burnt up all my spare time this winter and spring rebuilding my 7.3 and starting up the VRV prototyping projects.  Until then, I’ll be switching my GVOD with the manual for now.