It finally happened. My ignition switch (aka tumbler) finally went to hell. I knew it was coming a year ago, because my alternate keys wouldn’t fit as well as the original.  Over the last year, it got harder and harder put the key in without some sort of voodoo ritual or prayer to Prometheus to ensure the van would start.  Last Wednesday, after an important meeting, I hopped in the beast and the key didn’t fit.  It was finally time to replace the tumbler.

Last year, when my ignition started acting up, my friend recommended I pick up a spare ignition for the “inevitable.” I had the spare switch sitting in a box in the back of the van.  I didn’t want to swap it out right then in there, parked on a residential street in Westwood, so I tried to figure out a way to get it started.  I basically wedged a folding knife in the tumbler to move the broken pieces of metal out of the way.  Then I was able to get the key to fit in and turn.  Without hesitation, I drove the van home asap, just in case the ignition opened the circuit and left me stranded on the streets of Los Angeles.  Luckily, I got home AOK.

Replacing the ignition switch isn’t the hardest job in the world, so I figured while I had the steering column apart, I could also replace my long-broken blinker switch (aka “turn signal switch”).  I kind of hated telling co-drivers to “hold the turn signal on” because they never locked into the proper position.  Even though I’ve put in so much work into this IDI van for a half decade, nothing screamed “lame” like a poorly-functioning steering and blinker system.  Maybe I could spruce up the user-experience on this 31-year-old Ford.  Also, while I had it apart, I figured I could also investigate why my tilt-wheel mechanism wasn’t functioning too. 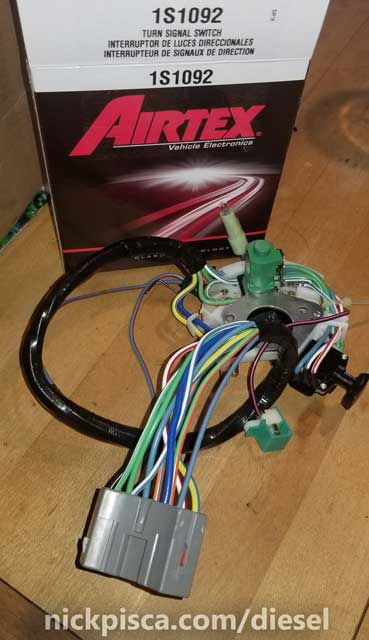 Pictured above, the “turn signal switch” is an underwhelming name for what it really does.  It’s better described as a Steering Column Electrical Hub, because it controls the horn/cruise control electrical slider contacts, ignition sensor electrical connections, hazard light control, blinker handle receiver, and tilt-wheel mechanism.  It also has the light bulb and retainer for the transmission arm indicator, and also a pigtail that mounts at the base of the steering column.  It’s a rather extensive electrical assembly.

The official Motorcraft part number for this is the #E4UZ13341D. I didn’t even bother with calling the Ford Stealerships about obtaining this because it would likely be more valuable than a few ounces of gold.  I bought the 1S1092 Airtex, because it received better reviews than the other two assemblies.  According to several auto parts sites, my 1988 E250 Diesel was only compatible with the OE PRO SM65F or the Standard Motor Products DS1306.  The only reason why I opted to go with the Airtex was because someone on a diesel forum vouched for its efficacy.  Spoiler alert: it worked for my vehicle as well. 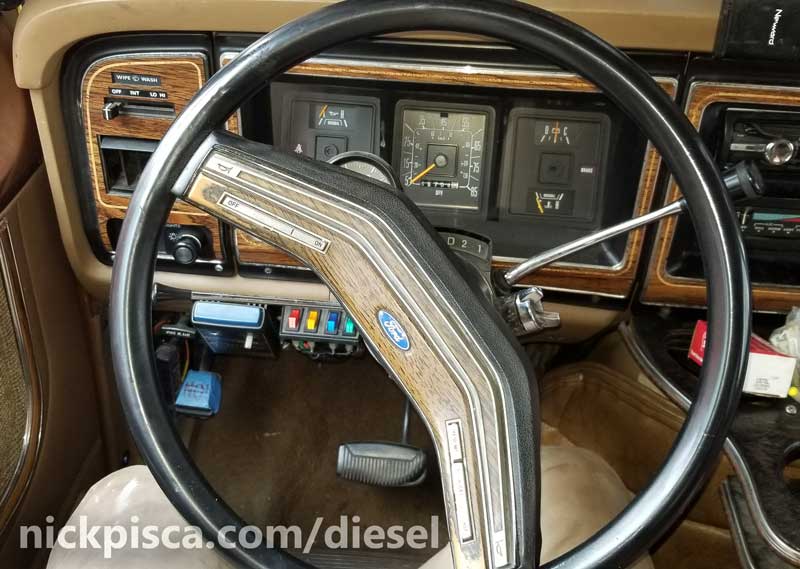 Since the vast majority of Ford, Lincoln, and Mercury vehicles from the late 70’s and throughout the 80’s had this identical steering column, it’s safe to assume that this installation methodology should work across most platforms, with some minor changes in customization.

Here’s the video of me ripping this crap apart.  Enjoy:

The video does a great job (not to toot my own horn) explaining how to get that column apart, how to pull the tumbler, and how to fiddle the turn signal switch out of the housing.  But to clarify even more, here are some images.

In order to undo the nut, I had to hold the steering wheel tight.  That’s pretty hard to do with one hand, so in the video I said I used “a steering locker.”  I should have clarified, I used a steering wheel locker like “the Club.”  With the Club pressed up against the left windshield pillar, the nut came free with enough force and penetrate oil.

The tumbler only comes out if the key is in “ON” position and the lock pin is pressed in.  But unless you know exactly where that pin location is, the removal will confound you.  I didn’t see any decent videos of how to remove a tumbler on an older Ford, but there were plenty for newer cars and trucks.  What few videos of the older Fords were filmed by an undiagnosed epileptic or by someone who doesn’t grasp the concept of putting the camera within one light-year of the object in interest.  I hope this article helps more than poorly-crafted videos out there. 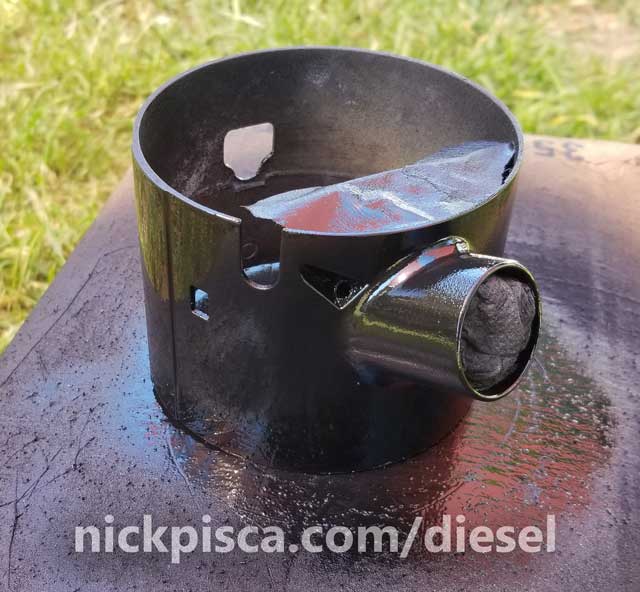 There isn’t anything special here to clarify.  I just wanted to show off my painting skillz.

Overall, this was a pretty easy job, and now my guests can drive this Ford without me pleading with the Great Eagle Spirit to help turn the ignition.