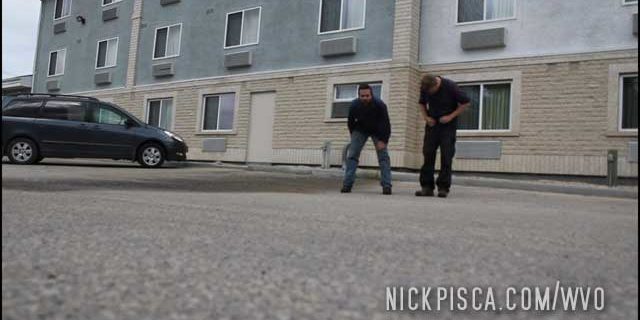 After driving throughout the night and staying up loading the van the night before, we needed to get some decent rest.  The next few days of our trip would be heading up to Flin Flon and Fort McMurray, so it would be a while before we got a real bed and shower.  So we stayed at the Super 8 on the west side of Winnipeg, because our plan was to get some sleep and get an early start the next day heading north west.

However, after we unloaded our gear, I noticed the van was sitting odd. The suspension was old, and it appeared our latest drive did take a toll on it.  The coils seemed bottomed out and we needed a solution.

After brainstorming for a bit, Glenn thought of a brilliant solution. Instead of waiting a week for a set of new coil springs, he suggested we install a solid rubber hockey puck between the i-beam and coil. Since the next day was Canada Day, we knew all the stores would be closed. So we rushed off to the nearest general store and found hockey pucks. Good thing we were in Canada; they had a VAST selection of pucks.

Anyway, we burned the middle of Canada Day pulling off the i-beams and coils, and installing hockey puck spacers. But once it was done, it worked beautifully. We used them for the duration of the entire 2017 WVO roadtrip, and they didn’t even show any damage or wear when we replaced the coils back in Wisconsin.

Tried running thicker oil this trip, and only a few hours from home, we had to unclog and clean the…

We drove down to Iowa to pick up the Frankenvan (a Chrysler minivan with a TDI engine in it.)

It was getting late, and we had to get to the Osoyoos Border Crossing before dark.  This was not an…