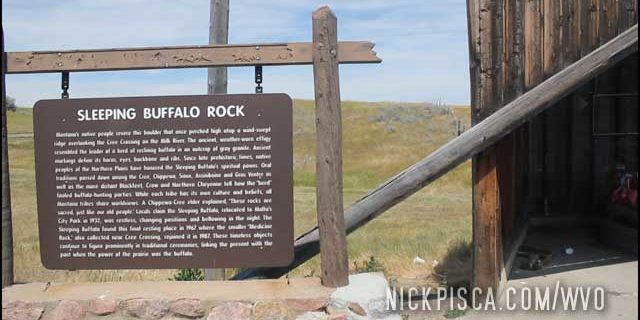 “Montana’s native people revere this boulder that once perched high atop a wind-swept ridge overlooking the Cree Crossing on the Milk River. The ancient, weather-worn effigy resembled the leader of a herd of reclining buffalo in an outcrop of gray granite. Ancient markings define its horn, eyes, backbone and ribs. Since late prehistoric times, native peoples of the Northern Plains have honored the Sleeping Buffalo’s spiritual power.  Oral traditions passed down among the Cree, Chippewa, Sioux, Assiniboine and Gros Ventre as well as the more distant Blackfeet, Crow and Norther Cheyenne tell how the ‘herd’ fooled buffalo-hunting parties.  While each tribe has its own culture and beliefs, all Montana tribes share worldviews.  A Chippewa-Cree elder explained, ‘These rocks are sacred, just like our old people.’ Locals claim the Sleeping Buffalo, relocated to Malta’s City Park in 1932, was restless, changing positions and bellowing in the night.  The Sleeping Buffalo found this final resting place in 1967 where the smaller ‘Medicine Rock,’ also collected near Cree Crossing, rejoined it in 1987.  These timeless objects continue to figure prominently in traditional ceremonies, linking the present with the past when the power of the prairie was the buffalo.” 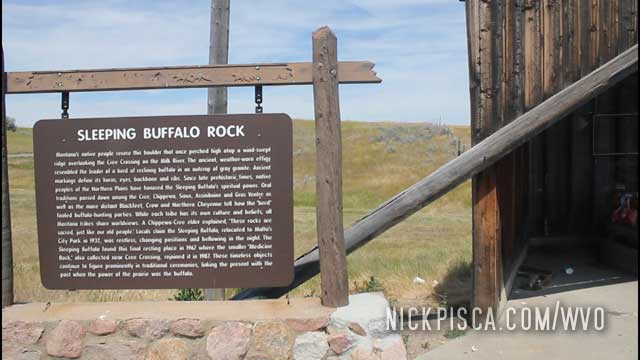 This National Parks run fort is a great glimpse of the past. Along our path, we noticed a fort on…

The road to the TRex Center is gravel and rough, but short. The museum pops up in the middle of…