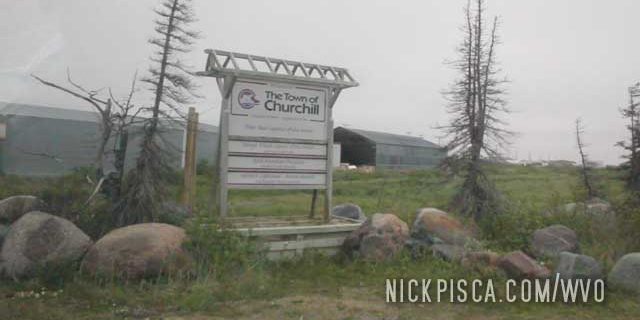 Churchill was the main destination for the 2016 WVO Roadrip.  It was truly an exotic and special place.

As we approached the town, the train started to bustle with conversation and activity.  Several of the occupants had been on the train for over three days, travelling the entire distance from Winnipeg.  Everyone was pretty excited to get off this train.  Even Glenn and I (who cheated by getting on in Thompson) who had a measly 18-hour journey was ready to depart. 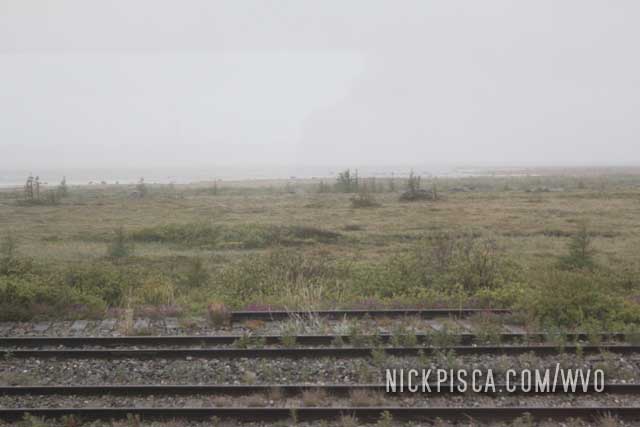 Glenn and I attempted a rather risky gamble on this trip.  You see, the trains from Winnipeg to Churchill travels every 3 days.  One is going northbound while the other is going southbound.  That means you have to stay in Churchill for a minimum of 3 days to proceed back south.  There is one workaround: take the same train back south that you took north.  The train rests in Churchill for several hours before heading back south.  This is a huge gamble because if the train had arrived late into Churchill, the southbound departure time DOES NOT change.  So, if it was 8 hours late (not unlikely in the summer after a rain), that means the train will basically depart right after it arrived.  We had already purchased our return tickets, so we were really wishing for an early or on-time arrival in Churchill.  Thankfully, our arrival was nearly on time, maybe an hour late at most.

Since we didn’t know when we would have arrived in Churchill, we literally didn’t plan anything.  We knew what was available to see in Churchill (Polar bear tours, beluga whale tours, Hudson Bay boating, Prince of Wales Fort Historical Site, etc) but we never booked anything because we worried that we would miss our reservation with a delayed train or mechanical failure on the van.

So we plopped off the train and asked the train station clerk for suggestions on rapid service for tours.  She introduced us to the good people at Lazy Bear Lodge who got us hooked up right away.

I think time is handled a little more relaxed in this town.  Since the train dictates the schedule of the town, no one is really hampered with strict reservations and whatnot.  It’s pretty easy going. 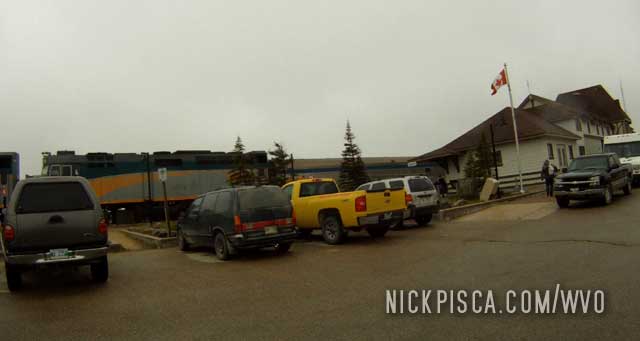 So the man from Lazy Bear Lodge took us over to his place to set up our site-seeing.  He was very accommodating.  He literally took us from the station to his lodge without us having any reservation or anything.  On the drive, he asked us where we are staying, and we just said we are leaving on the train that evening.  He was surprised, and encouraged us to stay for several days, because it’s hard to see everything in Churchill in such a short time.  But he didn’t argue much (Canadian niceness) and got us on the next tour in the Hudson asap. 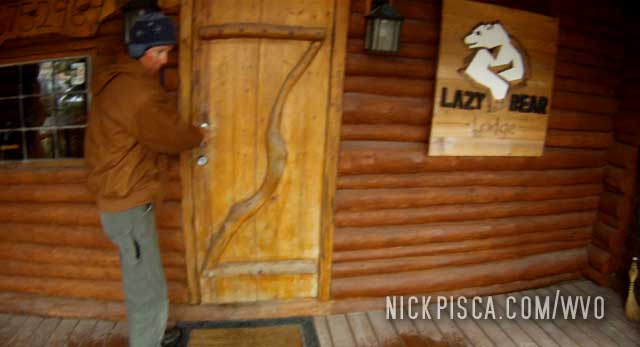 He told us the boat ride will be frigid so we needed to get our winter gear on fast.  The boat left in less than hour.  He also sold us some nice breakfast buffet from their lodge, so we could get some breaky before the day.  If we did need a place to stay, we would have definitely stayed there.  It was a nice place.

Out on the boat, he drove us passed icebergs and beluga whales.  It was wild! 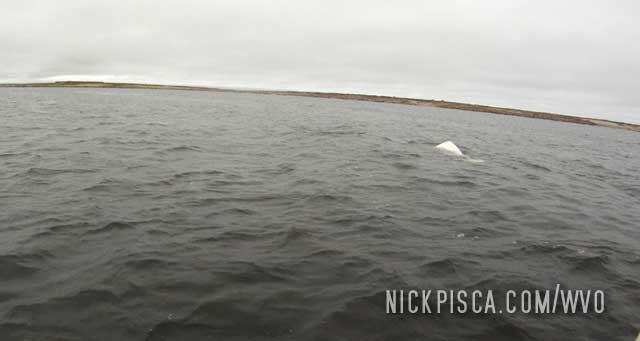 The boat ride took us out to the neighboring peninsula where the Prince of Wales Fort Historical Site resided.  This was a blast from the past.  This fort dated back to the 1710’s!  Amazing this little frozen area had such old artifacts.

Our guide and the National Park ranger had high powered rifles with them.  They constantly talked about the danger of polar bears.  They said that if a polar bear came on the horizon, they would have to kill it for the safety of the tourists.  It was serious. 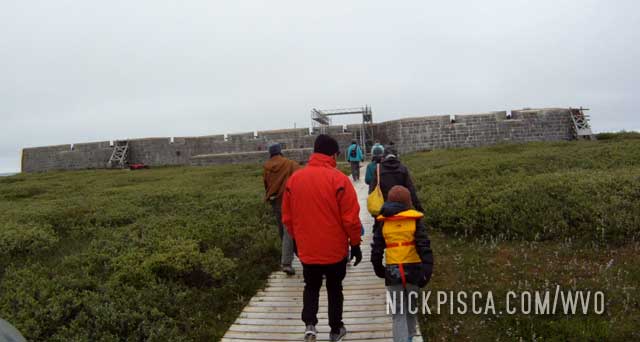 After the boat ride, our guide let us venture out into the town, with the understanding that if a bear sees you, you MUST find a nearby car or house to escape into.  By Churchill law, no cars or houses can be locked, so humans can find refuge.  I was starting to think they residents here are overly protective or playing me.  Then something proved me how serious this place is. 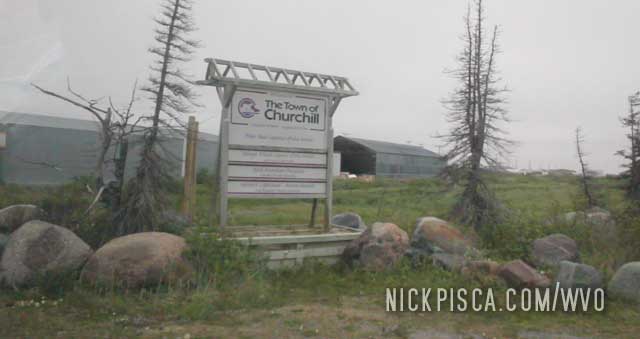 We of course wanted to visit the Hudson Bay and possibly go swimming.  It was way too cold, probably in the 30’s that day and the water still had ice in it.  As we walked along the shore, we saw a monument.  I thought it was some kind of thing talking about the Hudson Bay.  Nope.  It was a literal monument to all the people who died in that bay, from boating accidents, polar bear attacks, and other things.  I guess the locals were right about the risks in this area.  We tossed some rocks in the water and decided to stay indoors for the remainder of the stay.  No sense in risking our lives if a polar bear spotted us from the horizon. 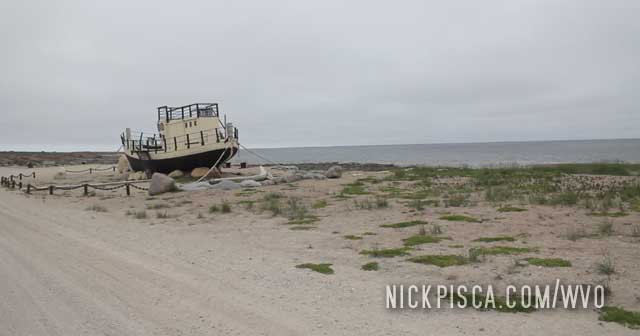 Churchill has a nice community center, as most of these northern towns have.  There isn’t much to do in these places for the 22-hour darkness of the winter months, so interiority is important.  Also, they have a great Eskimo / Itsanitaq Museum with dozens of artifacts and mounted animals from the north. 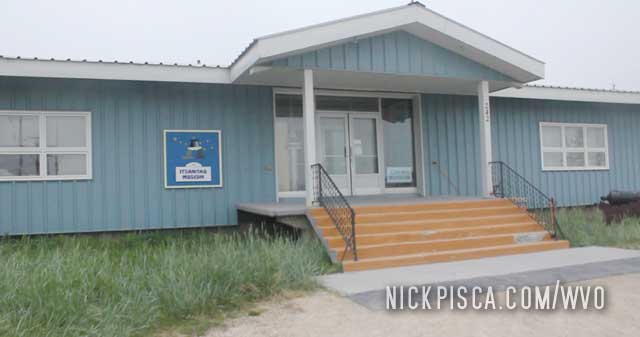 After all of that, we needed to get on the train back to the south.  Even though they said we wouldn’t be able to do everything in Churchill in 8 hours, we did do a lot.  We didn’t do one of the famed Polar Bear Tours, but I think we risked our lives enough for one day.

It was another 18-hour ride back to Thompson, so we elected to sleep the remainder of the train ride.  It was a good day.

(Update 2017:  While we were in Flin Flon on the 2017 WVO roadtrip to Fort McMurray AB, we learned from some of the locals that the train to Churchill was shut down due to railway damage.  The government and corporation that handles the railway are fighting to see who will fix it.  I hope they fix it soon, but if not, things will look bleak for the tourist industry in Churchill as well as for the farmers that rely on the grain transports up to the Hudson Bay for shipping across Canada and worldwide.  )

Our guide from Lazy Bear Lodge took us on a boat ride into the Hudson Bay.  We got to follow…

Near the 'Town' of Back Manitoba

The further north the train took us, the more foreign this place got.  Most of this area was completely uninhabited. …