Thoughts on the latest 12,000-mile roadtrip to the Arctic Ocean 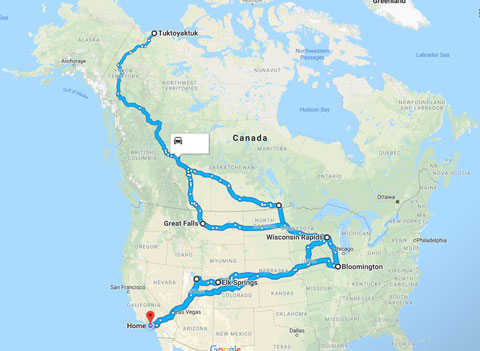 I’m finally back home. After driving over 12,000 miles from Los Angeles to Wisconsin to the Yukon Arctic to Montana to Wisc and back to LA, I’m parking the beast in the driveway for some well-deserved rest. The new engine performed well, but pretty much everything else on the vehicle rattled to pieces. 1584 kilometers of arctic yukon mud/pulverized stone roads was a bit much for the old van.

While driving the Dempster Highway up near Inuvik NWT, the washboard roads rattled my winch bumper to the point of near catastrophic failure.  The metal fatique ripped the bumper mounts out completely on the passenger side, and all but one mount on the driver’s side.  When we found the problem on a ferry in the Northwest Territories, the bumper was literally held on by one last bolt, and had bend down to nearly touching the ground, like a snow plow.  Crazy stuff.  We quickly strapped it up with a ratchet strap to get it to the nearest hardware store in Whitehorse… about 700 miles away!

I had a few odd things go on with an injector in Whitehorse (which appears to have worked itself out with a filter full of ATF), and we lost the GP’s for a few days trying to track down whatever grounded out the fusible links. We found that in Fort Nelson, but it took us a few thousand kilometers of driving to find a freaking auto parts store with the staff that actually knew what a fusible link was. But that was about it for problems with the engine.

The major issues were my gearvender overdrive tailshaft seal going out on me in the middle of nowhere alaska hwy and draining its fluid without me knowing until it was too late. It was kinda fun replacing that seal in the parking lot of the Super 8… not really. And apparently the nearest jug of synthetic Lucas gear oil was in Edmonton. Sheesh. We managed to get by with some generic anti-slip BS. Also, my AC leaked out so bad, that we thought there was a tire leak.

I managed to limp her back to the US without the OD. That was a PITA. I’ve had that OD for years now and I kinda like it. We got it back to Wisconsin to my uncle’s shop and did some maintenance for the drive to L.A. Ordered and installed new GVOD solenoid, filters, and gaskets. It seemed to do the trick, because all the way from Wisc to LA, it performed well, except at the very end. Maybe my fixes were temporary. Also, I found the leak on the rear AC low pressure line, which happened to be rubbing on the driver’s side shock mount. Nice design Ford. It wore a hole in it about size of a grain of sand. I tried to JB weld it (it is exceedingly difficult to reach), which held vacuum for a few days. However when I charged it, it leaked out almost instantly. I put a fuel hose on the line and put 3 hose clamps on the fuel hose. It held for the rest of the trip. And thank Zeus, cuz driving thru Utah, Arizona, Nevada, and the Mojave was about 106-110 degrees.

Lastly, I think the GP wires grounding out ended up frying my alternator. by the time I hit the MN/WI border, the voltages were approaching 15.0 volts. I got it back to my hometown, had my alternator rebuilt, and the rebuilder F’ed it up. Then I had to resort to buying a new 3G alternator from Autozoo without the core, cuz I’m taking my motorcraft 3G to my alternator guy in LA. He can rebuild anything.

Now, I noticed a few things about my engine. One is that I have what I would consider higher EGT’s. When i’m cruising at 60mph, i get about 600-700 deg F, which seems fine. However, if I want to cruise 75mph, it build up decent temp around 900 deg F. I usually use the Overdrive when I’m going that fast, because with my gearing, I get about 2600 RPM’s without the overdrive just to get it around 64mph. So the Overdrive is a time machine. It appears my EGT’s increase exponentially as I try to push the limits of my engine. If I want to go 80mph, my EGT’s sit just around 1000 deg F or higher. I’m thinking the overdrive combined with the wind resistance (this van is about as aerodynamic as a brick) is putting an exponential amount of force which means it requires even more fuel and power to get those extra few MPH.

I know asking for 80mph from a 31 year old IDI van is a bit much, but speed limits in Montana and Utah are now 80mph, so I wanted to keep up with the fancy new cars in what they consider to be “traffic.” But I thought I’d ask the forum if they encountered similar restrictions. 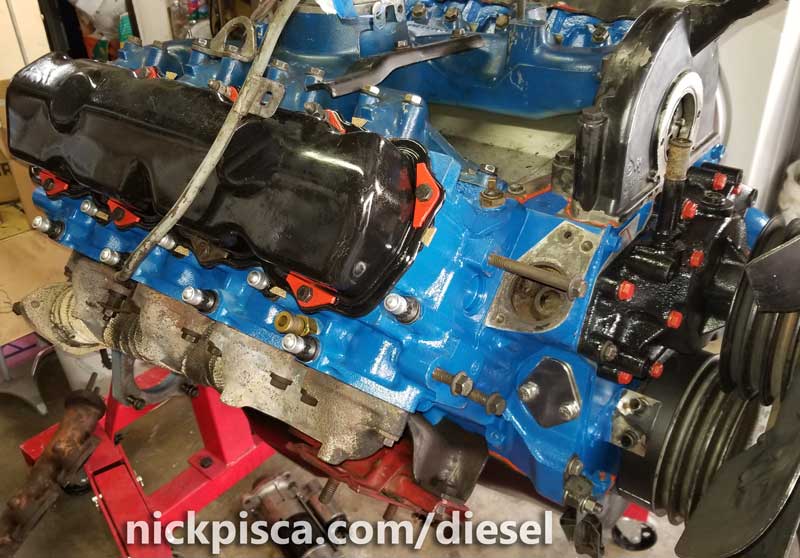 My mpg was amazing with the new rebuild. Even when I was driving like I stole it and making some decent speed (averaging about 70-75mph on the highway) and pushing the beast to 1100 deg F up any and all hills and mountain passes, I get a trip average of 16.9mpg. When I drove 55-60mph in some of the remote areas of the Yukon (their speed limits are much less than ours), I was able to get higher, and one fill up measured to be over 21mpg. Can’t be too upset with that. But now that I have this spiffy turbo, I almost never limit myself to 60mph. I really should, for environmental reasons, but the turbo makes things easier. My van now accelerates like the rest of traffic, so why not use it?

I did have some odd weirdness at higher altitudes. If was over 5000 ft up, about 1 out of 8 inclines, my engine felt like it had no power. My gauge would read higher EGT’s and the exhaust would be black AF. I thought something was up, but once I crested the summit and drove down the hill, by the time I hit the next incline, my engine would be back to normal. I couldn’t figure out why. I was totally random. Also, the loss of power was not that bad, it just required me to gear down, sometimes even to #2 and keeping the speed around 45-50mph. It was revving up to around 3K, but it made it up every hill that this randomness occurred. 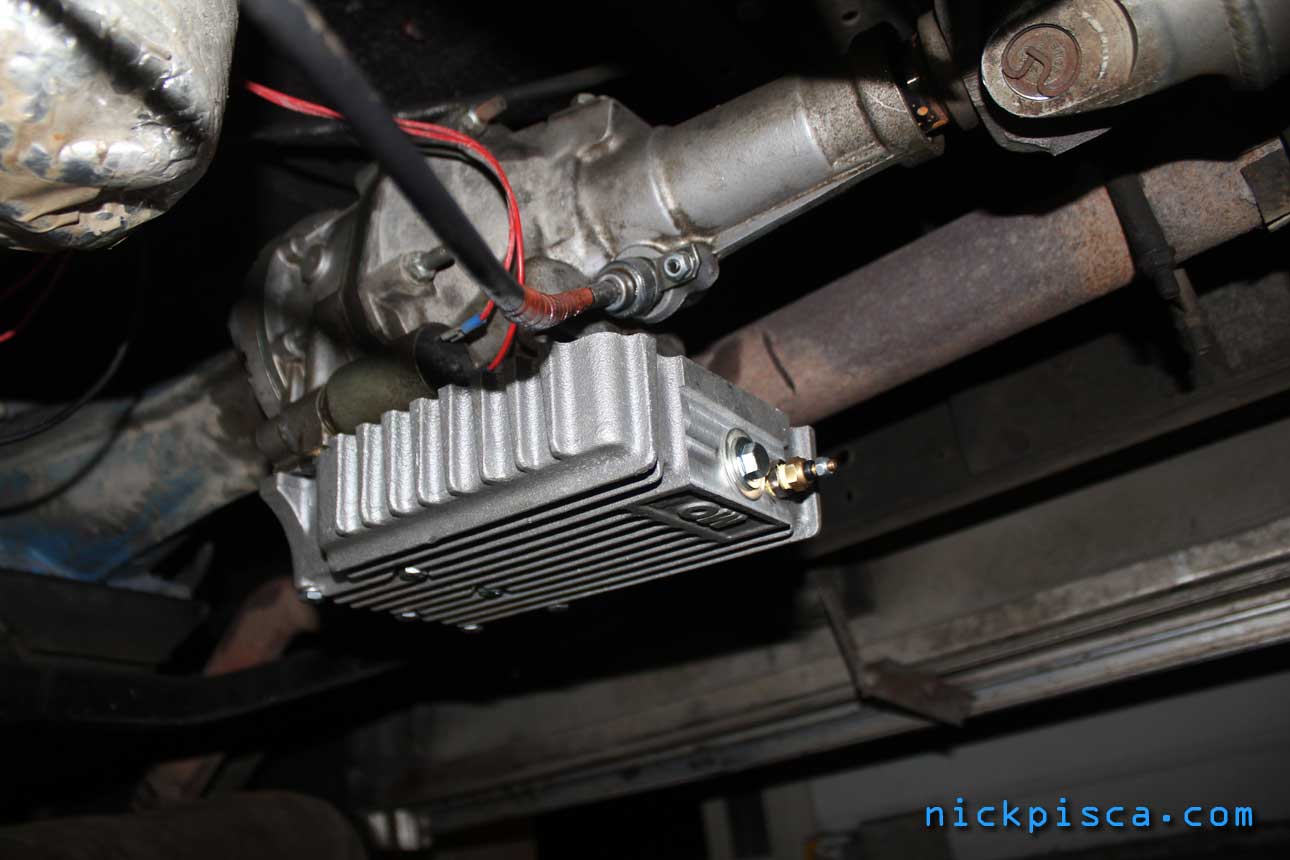 Also, while I had the Overdrive issues, I called Gearvender HQ and they told me that if something caused a problem, that they recommend just driving the van without the device engaged. That’s kinda slow, but whatever. While I was driving it with no overdrive, I kind of forgot how much of a tank this beast was. It didn’t seem to matter if there was 3000 lbs of gear, tools, fuel, people, and stuff in the van, or if it was empty. It would climb a mountain pass with ease, and coast down a 6% grade without needing to tap the brakes. Maybe my overdrive is putting some undo strain on the engine, thus causing the EGT’s. IDK. I was just kind of hoping that my latest rebuild would allow me to push this vehicle to match the climbing speeds of the contemporary gassers. Instead, I’m more focused on my EGT, boost, fuel pressure, and voltage gauges than enjoying the scenery.