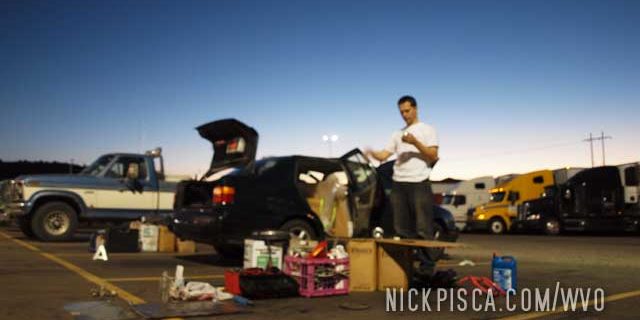 Start: Los Angeles 201818 miles on the odometer, 10pm Friday the 18th.
Well, we got started on the trip on Friday. We left 4 hours later than expected due to custom modifications to the car. Plus we had to reload the car because it was sitting pretty low when we left.

Near Lake Havasu, CA. 202099, 2:45am Sat.
Added 1.75 cubes. I guess we were running a bit fast and also we are really loaded up. We estimated better mileage on vo, but ran the tank dry by accident. We did a system purge with about a thousand moths and desert flies swarming our flashlights. Thankfully, one didn’t do the tempting dive into vo funnel, as has happened in the past.

Kingman, AZ. 202145, 3:30am-6:45am Sat.
As with all these trips, we always get a first-day issue. This one came very early. In some of the other threads, I had posted my issue with a diesel-side fuel problem, which I thought I had worked out. Well, after running the vo side dry, I must have got some air in the diesel system or something. We were having some power issues up hills and the speed maxed out at 70 mph even down hill. We thought we could make it to Flagstaff and do some repairs there where supplies could be more prevalent, but after passing Kingman and some truck stops, it seemed more logical to tackle it right away (in the dark) instead of in the Arizona sun.
I had packed a spare generic fuel pump and several useful parts, like fuel hose, clamps, wire, switches, etc. Within a few house of diagnosing the issue (even considering dropping the tank in the parking lot), we found that putting a pusher pump at the stock diesel tank fuel pickup was the best solution for now. This way, if there was a small air leak in one of the fuel lines from the diesel tank, at least I’m pressurizing the system, rather than sucking air.
The only thing we didn’t have on hand was an in-line generic fuse housing. I tried asking some of the 24-hour trucker shops and auto supply stores there, but none of them knew what an in-line generic fuse housing was. One manager insisted that my fuse housing was under my dash. I didn’t want to argue with him, but I said I was just putting an auxiliary electrical thing on my car, like fog lights or a transfer pump. He just repeated my fuse box was under my dash several times. Ugh.
We fabbed up a homemade fuse holder out of some spare electrical end plugs and electrical tape. We also set up some wooden block supports so that our diesel pusher pump hoses wouldn’t become pinched by a cube in the back seat or other heavy item. The diesel pump now resides inside the dummy tire rim.
Now we have two pumps on individual switches, one pushing vo and the other pushing diesel, which really makes purging air out of the system easy. So far it’s appearing to resolve the power loss problem. 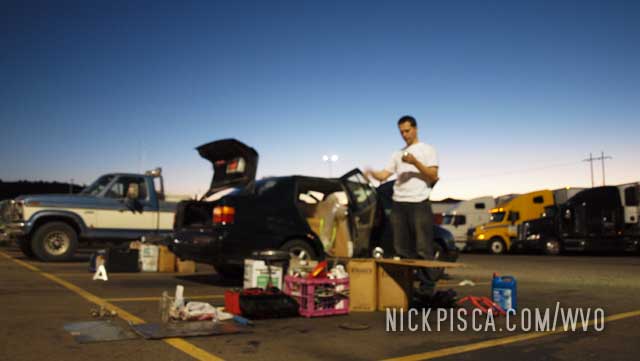 After reloading the Jetta (AGAIN), we were back on the road to Flagstaff. 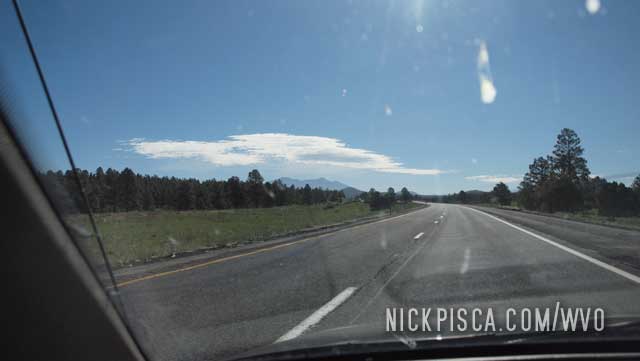 Passing through Flagstaff and Winslow

After our Day-One Breakdown, we were set to continue our Route-66 trek. We zipped passed Flagstaff, because we had visited…

Indianapolis, IN. 7:30pm, Thursday. Unfortunately, we weren’t able to visit Ash Cave. We ran out of daylight, and even if…

On the 2014 WVO Roadtrip, we woke up early to see the infamous Dinosaur National Park.  It lived up to…