Matthew Hall and Amy Szewczyk of Method Lab have been running a kick ass competition and exhibition called Rouse[d] for several months now.  This weekend, they posted the winners of the competition.  I’m sure they’ll be publishing the majority of the work soon, either online and/or in book format.

Matthew rocks.  I’ve been in contact with him since early 2008 when he moved to LA.  We got connected when my work was posted on the scriptedbypurpose site and he was making connections in Los Angeles.  It’s a bit of a long story with our conversations, but we’ve discussed the discourse of scripting in real architectural firms.  I’ve been highly critical of the industry’s neglect of scripting design in architecture, and I’ve been very blunt about this gap in administration.  Matthew looked to get into coding methodologies while working at EOM, and it’s clear that he’s still interested in this important technique by establishing the Rouse[D] framework.  Kudos to Matt.

He’s back in Detroit and will be curating the Rouse[d] exhibit in September.  Several digitalist and contemporary firms will be showcased in the Rouse[d] Exhibit; I don’t know if this info has been released yet, so I won’t write who, but I can tell you it’s a primo list.  (Naturally whenever I’m involved, I raise the bar :-p  )

I’ll post my codes to this exhibit once the gallery opens in September.  Portions of my project code are already on the 0001d Blast Meta Scripting Wiki, but they are secondary functions and subroutines for curve and vector organization.  (Just to reiterate from previous posts to this wiki, when I say “my project,” I mean the work on which Kieran McCaughey and I have collaborated.) 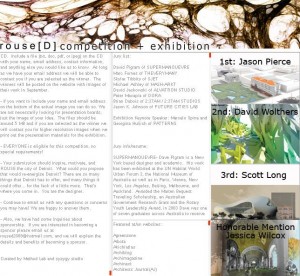 Lastly, Jessica Wilcox is a designer from Wisconsin.   Mad props to her from my home state!